HP at the IMAX 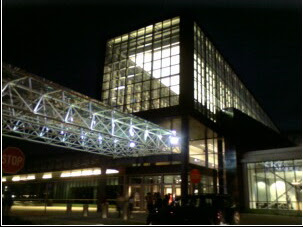 Went to see The Order of the Phoenix tonight at the IMAX at the new Smithsonian Air & Space Museum out in Herndon, VA. Took a photo of the outside of the building tonight as I left (it is a very cool place, got to see the Enterprise - the Space Shuttle - which for any Star Trek fan is a thrill). The showing was completely sold out and the battle at the end of the film looked spectacular on the IMAX screen.

The film just gets better - there are so many wonderful details to discover. Though sadly so brief, the impact is 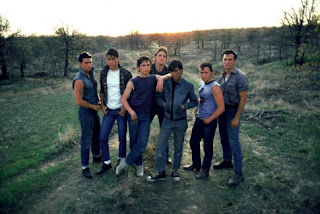 just as powerful when Harry is able to see into Snape's past during their Occlumency lessons. What Harry sees continues to remind me of the sort of scenes we see in the book The Outsiders, by S.E. Hinton. Snape is the greaser (and that is how Jo Rowling does describe him) and Harry's father and Sirius are the rich and privileged "socs." Indeed, Cherry Valance in The Outsiders reminds us a lot of Lily Potter.

Imelda Staunton's Delores Umbridge is worth the price of the ticket alone. How she is able to blend the ridiculous and the horror into one character is truly an achievement. The Weasley Twins, though, nearly steal the show with their exuberant exit from Hogwarts during the last half of the film.

It is also interesting to spend more time thinking about how the filmmakers interpreted for film the mainly psychological battle (the outward battle reflects the inner one for Harry) through the use of flashbacks, not only for this film but for others. In fact, there are many flashbacks throughout the film, including during the Occlumency scenes as well. Again, the audience brings its own affection to the characters we see flash by and we see how Harry, Ron, and Hermione have grown up since the first film seven years ago.

Our attention now begins to turn to the Big Weekend coming up - in fact, a week from today we will be sequestered away and reading the final book in the series. We will be liveblogging from the Fairfax Borders starting on Friday, July 20th so if you are in the area, please stop by and say hello. We will also be interviewing the author John Granger on July 20, so stay tuned for that live podcast. Stay tuned for updates!
Posted by Unknown at 10:36 PM

We just got back from a Sunday afternoon showing and I think this is the best of the HP films. Where there are several deviations from the book I like the way that everything comes together. The last hour of the film seems like 15 min.

I can't decide if my favorite character in this film is Luna Lovegood or Delores Umbridge. Both are wonderful in creating the essence of their characters.

"Harry's father and serious are the rich and privileged 'socs.'."