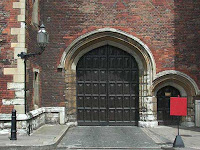 Last week a member of the Archbishop of Canterbury's staff wrote a letter responding to the number of letters the Archbishop has received from those who are upset that Gene Robinson has not been invited to Lambeth. Here in the U.S., the leadership at 815 has been very clear in shutting down dissension among progressive Episcopalian upset that Gene Robinson has been singled out not to receive an invite by conveying that there were steps being taken behind the scenes and sit tight. So the "upset" at Rowan Williams and threats that basically disappeared after 815 got out the word to sit tight.

To illustrate this point, this letter from Canon Flora Winfield, of the office for International, Ecumenical and Anglican Communion Affairs (which makes it appear that he was writing to American Episcopalians upset over Gene Robinson's non-invite and not just Church of England ones) was sent out to those upset over Robinson's snub. It includes this paragraph:

From the time of the election of Bishop Gene Robinson to See of New Hampshire, both the representatives of many Anglican Provinces and the Instruments of Communion made it clear that full recognition by the Communion could not be given to a bishop whose chosen lifestyle would, in most Provinces of the Communion, give rise to canonical impediment to his consecration as a bishop. The Archbishop has to be loyal to that widespread concern as well as bearing in mind the position of Bishop Robinson within The Episcopal Church. The Archbishop is therefore exploring inviting Bishop Robinson to the conference in another status.

In relation to the Times report of 29th June that 'Gene Robinson is to be invited to the Lambeth Conference of the Anglican Church next summer', it should be noted that there is no change to the Archbishop of Canterbury's decision not to invite the Bishop of New Hampshire to the conference as a participating bishop. It is still being explored whether Bishop Robinson might attend in another status but no invitation has been issued.

There does seem to be heavy lobbying going on to get Robinson an invite (but we also know how the British feel about American-style lobbying), but it may mean he gains observer status (the Episcopal Church has lost its place in the Anglican Consultative Council for the time being too and can merely "observe" as an outsider). But no invitations have been issued for that either. It is obvious that Rowan Williams is keeping his options publicly open, if he is being genuine here and we choose to think he is. It's easy to get cynical at this point, and perhaps more world-weary. But we choose not to go there, if we can help it. Please pass that old copy of Anne of Green Gables.

But it still means Robinson is not officially welcomed by Canterbury to Lambeth - at least for now. That could stand or another position may be negotiated. Are TEC leaders confident that Canterbury will rescind the non-invite and recognize Robinson? Or are they happy with him being invited as an outsider? 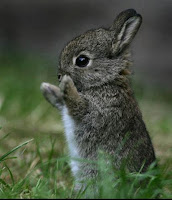 One could make the case they are not, and that's why the massive lawsuits are underway from 815's office in Manhattan. 815 lacks confidence to negotiate (it takes great moral strength to negotiate), but perhaps their target of negotiations is across the pond (how ironic!), and not here at home.

If no invitation is issued - or others are withdrawn, as George Conger writes in the Living Church, how will the Episcopal Church react? Therefore, it appears that Lambeth Palace continues to hold the carrot stick in front of the Episcopal Church, but perhaps the next question will be "Where's the bunny?"
Posted by Unknown at 11:55 AM