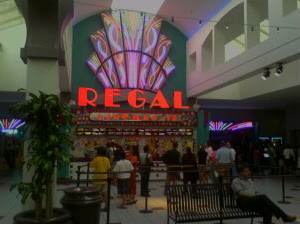 We're here and ready to see the film, The Order of the Phoenix. There are kids here dressed in costume, and lots of other folks who look a bit like they once stood in line for four hours to see Empire Strikes Back. These days, though, we buy our tickets online in advance. Some things do get better. Stay tuned for the review.

11:10 p.m. - A quick post - the film is quite simply the best one. Now, the first two films were faithfully adapted, in other words the books were basically filmed as is. You could read the books and watch the films and listen to the audio books and they were almost interchangeable. The difference with the films was that not everything made it in - but what did make it in was representative of the books.

But if one is a filmmaker - like for example, Peter Jackson - the director is not just a "re-enacter" of a book, the director interprets the story, making decisions to tell the best film-story, which can differ substantially from great book storytelling. So while the first two films succeeded at representing what was in the first two books, they lacked a vision. They were delightful and helped us come more acquainted with J.K. Rowling's wizarding world. It was like a trip to Disneyland.

The Order of the Phoenix is no trip to Disneyland.

Alfonso Curran directed the third film and was the first to really make a Harry Potter film. His prints are all over that film, his vision, his artistry. Mike Newell took the helm for the fourth film, and again interjected his own vision and artistry for that film.

But this one, the fifth one, stands alone. Now, I don't think that it is aimed at the non-Harry Potter reader or film watcher. One of the huge pleasures tonight was watching it with hundreds and hundreds of people who have read all six books. It is obvious that the filmmaker and the scriptwriter have read all six books and both tipping the hat to the past as well as foreshadowing (what we know) about the future is all over the film. For example, just watch the character of Ginny Weasley in this film.

It was fast, it was furious, it was breathtaking, there were times when I wanted to get out the gomper and freeze the frame and go back and watch a bit again (drats, have to wait for the DVD). It was intense, it was deep, and it was artistry. 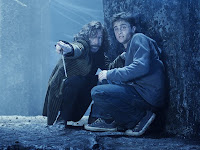 As a huge fan of the books, there is always a disappointment that comes from seeing favorite bits either "reimagined" or missing. We grieve those losses and changes and we move on. For even though there are some pretty substantial changes (including the identity of the snitch and how the snitch became a snitch) from a filmmaking point of view, they are very well done. How does someone condense a nearly 1,000 page book into a two hour movie? Well, David Yates and Michael Goldenberg have done it.

While we grieve the changes, we also marvel at the ingenuity of how the scenes were condensed or reinterpreted and on that measure, this film is the best of all five. In fact, this film does more than that - it is a catharsis for this one Episcopalian who has encountered one two many Grand Inquisitors of late.

What we seem to have in this film is a Certain Chancellor in Pink.

This film is incredibly grown up - more grown up then so-called adult films. It is surprising unromantic and darn near allegorical (see comment above). But even on its own terms, it is an extraordinary film and we make one vow tonight.

Never, never, never will we ever own a decorative plate with cats on it.

And so much for ever wearing those rose colored vestments again.

Great review, BB. I can hardly wait for the DVD. (I RARELY go to movies) But I am willing to do the line thing for a book. Hot dog! Borders, here I come! I will have #3 child with me.

The only thing that will hinder how fast we can read our copies is the availablity of the youngest (#4). When the first HP came out in 97, we were living in Europe, he was 11, and we read it together aloud (with the other children). When #5 came out, he asked if I would read it to him since we'd done that with the first four. We finished #6 the night before we left him at college for his freshman year. (We were hindered by work schedules! I'd had amazon send a copy to #3 child who was working that summer at Yellowstone National Park)

Now, with all of us working again, we will have to take turns reading into the night to finish before he returns for his junior year fo college. This is probably the last book I will ever read to/with him like this.

I guess the next time something like this happens, it will be the kids reading to me because my eyes have failed.

Never, never, never will we ever own a decorative plate with cats on it.

Could I then interest you in lovely Chili pepper motif?

I glad you got to see the movie on opening night!

Your countdown clock currently reads eight days until your the book release, that'll last you move than two hours. I'm glad in the midst of the stresses that surround you that you have this movie, the book release and the Dylan tour to help pull you out and give you some distraction and some excitement.

Blessing to you,
Kevin

Anam Cara, That is a great family sotry. My second oldest daughter is a great Harry Potter fan and reads the books to me whenever we get together. Now we will have something new to look forward to.

(I'm sorry that you had trouble findng Just Genesis. I hope that you bookmarked the site and will visit again. I left a comment for you.)