Must Read: A Look at a Past Fun-Filled Year 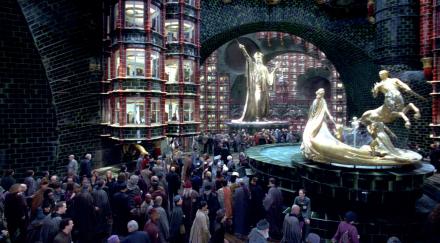 It's not enough to be reading the last book in the Harry Potter series, another must-read is Sarah Hey's excellent analysis of "where we are now" here. She focuses on what we've been watching here of the "bohemian/bourgeois" (what writer David Brooks calls Bobos) alliance in the Episcopal Church and dives deep into the state of the union (or disunion) right now. We've called it here the "bohemian activists" and the "bourgeois institutionalists" and Sarah calls it the "ideological progressives" and the "institutionalist progressives." She provides the details and thought-proving analysis that is very important to consider as we approach the September 30th deadine.

Here's an excerpt from Sarah's analysis:

For the progressive segment of the church is now quite divided as to strategy. In fact, my suspicion is that they have always been so divided, but only in the past four years has that division actually led to real and dire consequences for the two liberal sides.

I will call those two sides the "ideological progressives" and the "institutional progressives." By idealogical progressives I mean the "full speed ahead on our inclusive agenda, and damn the torpedoes" progressives. These are the folks that have fought their hearts out, scrapped and clawed and screamed and emoted their way to power -- and now that they seemingly have victory in their grasp, they sure as the dickens do not intend to hold back.

By "institutional progressives" I mean the "let's drop anchor and hope they all fall asleep" progressives. They firmly believe in all the usual progressive ideas about the scripture, authority, sexuality, the nature of Jesus, the resurrection, and Karl Marx. But they have spent a whole lot of time and energy announcing that they were moderates, obscuring their real beliefs, speaking in euphemisms, and carefully climbing the corporate ecclesial ladder. They are the pragmatists -- the ones that are uneasily aware that their capital campaigns are in danger, and that the pew numbers are not, in fact, "on their side". The strategy is to only move slowly and quietly and stealthily, so as not to startle or frighten the conservatives and the moderates in the pews.

When confronted with parishioner and economic losses, the ideological progressive will say "good enough for 'em," "quality not quantity", and "we need the pure gospel". I have always said that, so great is their ideology that they would be more than willing to have a diocese of 100 -- just so long as that 100 were Really Really Really Inclusive.

Without the institution, the innovation receives neither prestige, nor societal approval, nor stability.

The parasite of an idea -- one that is innately destructive and non-creative and de-stabilizing -- always needs a host, a constructive, creative, stable host.

In the past, it was the "institutional progressives" that held the levers of power at the national and even diocesan levels. That meant that they could "go slow", be very very quiet, and essentially core out the host from the inside without the host recognizing it.

But something happened at GC 2006 . . . something that led to some of the first displays of rage and fury and denunciation on the part of the institutionalists. It was at that convention that, slowly and steadily, as day by day marched on, they recognized that they no longer owned the convention.

I saw this unfold in the Special Committee which Bishop Lee was on at General Convention 2006. This is the committee charged with addressing the Windsor Report and Bishop Lee introduced the classic "institutional" resolution and it almost made it, almost made it indeed until one of the ideological progressives (we'll call them the activists) moved that they should break and come back. During that break the activists organized and when the committee met again Bishop Lee's resolution was smashed to smithereens and the activist version went forward instead. This led to Bishop Lee working through the institutional channels one more time (notice it came out of the House of Bishops) for B033 in the last days of the General Convention and it took institutional pressuring from the outgoing institutional progressive, Frank Griswold, to get it through the two houses - but it still failed because it did not have the backing of the activists. In fact, it caused a deeper split between the institutionalists and the activists for the activists were betrayed by it.

And it didn't comply with Windsor any way - not with 21 century communications getting it out before the institutionalist machine could - and the institutionalist General Convention efforts were a failure. Combine that with the victory of the activist candidate for Presiding Bishop (and we do believe that Bishop Lee did not vote for her) and it was a major loss for the progressive institutionalists.

The activists, though - knowing that many who sit in the pews are not activists, but institutionalists (even conservative in their sexual mores) - continue to use the rhetoric of institutionalists, but they are not institutionalists, they need the institution to give their cause legitimacy. This would help explain why 815 intervened so hard and stopped Virginia Protocol process. The Virginia Protocol was/is a stellar example of the results of a true listening process (and it was very real) where institutionalists like Bishop Lee and the Virginia Chancellor take the long view - that one day, if we keep the lines of communication open and remain in as close of communion as possible, we will be reunited. That's taking a long view - but it flies in the face of activists who need the endorsement and legitmacy of their actions now, not later. It's all or nothing, they are like fundamentalists - either God is doing a new thing and these sexual mores are no longer sinful but holy - or He is not. And if He is not, then its catastrophic - so He must be doing a new thing period. To resist that certainty is the sinful act and it must be punished. And so we have lawsuits cranking out of 815 like a printing press gone mad.

It is also clear that Bishop Lee has reached out to conservative institutionalists, like Bishop John Howe. The Bishop of Florida likes to think he's a conservative as well, and he is definitely an institutionalist and he too has reached out to Bishop Howe. But they, who are still operating under the Old Ways, will want to wrestle the keys away from the activists, or as Sarah puts it so well, "Look for a Last Gasp Effort by the institutionalist progressives to wrest control away from the ideological progressives. Though they smile gamely, and put on a brave front, you shouldn't doubt that there is a lot of talk burning up the phone and cyber-waves amongst these folks -- especially the bishops." One way to do that is to target the Windsor Bishops who are institutionalists and appeal to that connection - and not the deep theological divide between them. But they should think again about any attempt to "wrest control away from the ideological progressives." It's not going to happen - the activists are seasoned street fighters.