Bishop Swing goes over the cliff and into Disneyland 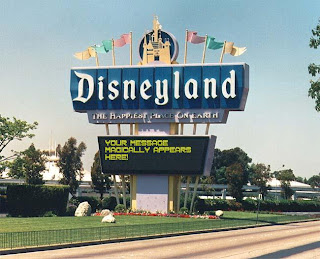 BB NOTE: StandFirm has the scoop here and is doing a fine job trying to keep others from plunging over the cliff with the former Bishop of California, Bill Swing, now in his first year of retirement and living the good life.

What we can't quite figure out from here is why he'd want to spout such strange verbiage, alluding to old colonial stereotypes that haven’t quite gotten out of the liberal bloodstream (or so it seems). It is apparently endorsed by the good folks at 815 for it is printed in the latest edition of Episcopal Life on its own merit and no disclaimer. But what do we make of it, really? Besides getting some blatant facts wrong (can we say "Virginia Theological Seminary" and 40 years in America and thirty years ordained by the Bishop of Connecticut, and oh, but never mind) what is Bishop Swing trying to tell us?

As we read the article, let's try substituting the word "Norwegian" for "Nigerian," and then perhaps let's substitute the word "Danish" for "Englishmen," and then how about “Swedes” for the word "American." And while we're at it, why don't we just substitute "Disneyland" for "The Episcopal Church." So here goes. Hang on to your tinfoil hat.

There was the picture in the newspaper (Sunday, May 6): Archbishop Peter Akinola and Bishop Martyn Minns. Neither was born, schooled, ordained to the priesthood in Sweden nor consecrated bishop according to the Constitution and Canons of Disneyland. But here they were, determined to overthrow Disneyland, and to replace it with themselves and a small number of Swedish colleagues.

Their aim is not to reform Disneyland or to set up a permanent parallel authority. They intend to become the sole authorized Disney presence in Sweden. The other side of that coin is that they intend for Disneyland to be cut off from the Disney Communion and set aside.

It’s quite a bold Swedish strategy for a Dane and a Norwegian. In a brief time, they want to undo what it has taken many generations of Swedes to build.

This is way beyond theology or scriptural interpretations. This is a naked power play that is reminiscent of colonial aspiration in other centuries. Instead of the Danish colonizing Norway, we are looking at a picture of a Norwegian and a Dane trying to colonize Sweden, with their unique brand of Disneyism from an evangelical point of view.

These two people who have not been part of a longstanding Swedish experience smile triumphantly as they embark on a plot to take away our birthright, our heritage, our Disney connection, our ministries to the poor, our official prayer book tradition, our schools, churches, agencies and our resources.

These two bishops and their colleagues are enjoying the first spoils that arise from our family struggle over human sexuality. But what they don’t realize is that they have touched and trampled on the taproot of our faithfulness to the mission of Mickey Mouse in Sweden that goes 400 years into the earth of this country. Disneyland will withstand this assault from across the ocean. And our mission will endure, the Mouse being our helper.

LATER: "It’s quite a bold Swedish strategy for a Dane and a Norwegian. In a brief time, they want to undo what it has taken many generations of Swedes to build." Well, we 'll just have to watch out for "bold Swedish strategies" and keep an eye out for Danes and Norwegians. They do seem intent on taking over Disneyland, and wouldn't that be a shame.

Perhaps the real meaning of words matter after all.

bb, you make no sense.

Now, this is only my opinion, but it sounds to me like Mr. Swing has taken a few too many hits from some Diooese of California weed.

Wow... I was reading the esteemed retired Bishops words and my mind began toi wax ornery, something along the lines of "Hey, did you hear the joke about the Nigerian and Englishman who.... For a church that claim to be the yeoman guard of tolerance, this piece smelled a bit xenophobic, but I digress.

I was also struck by the blythe tone alluding to the "Family Problem". You'd think there was a tiff over selecting the color of the drapes in the rectory.

It's been obvious for years that racism was one of the big things motivating the leadership of ECUSA and liberals generally.

bb,
It makes a lot of sense to me and shows how ridiculous ecusa is becomming.

While "Night on Bald Mountain" is a nice choice for the +Swing's article, my vote is going to have to go to "Dance of the Hours."

I think the ostriches, hippos, elephants, and alligators all attempting to perform the actual ballet is a bit descriptive of TEC -- gotta love them hippos!