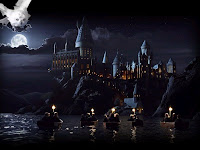 Posted this over at HogwartsProfessor this afternoon:

I was watching Jo Rowling’s interview on British television (I think it was on yesterday) and she really shut the door on writing any more about “Harry Potter” - but did not shut the door on writing about the wizarding world. She also talked about sobbing when she wrote one of the last chapters (not the last chapter) and downing a half-bottle of champagne and going home with smeared mascara. For the first time, really, I thought that indeed Harry may go behind the veil, but will not come back.

On the other hand, what else might make her sob like that - but not when she actually finished the book (where she said she didn’t cry). Something huge happens in the chapter and what else could it be, besides the death of Harry Potter?

And of course, who needs to be redeemed? Who has more secrets than all the buildings at Langley? Who seems to be in incredible spiritual and emotion pain, suppressed into rage? Who does Harry hate more than perhaps even Voldemort himself?

The Trail of Severus Snape is now underway in the LeakyLounge (sponsored by the Leaky Cauldron). You can go here: http://www.leakylounge.com/index.php?showtopic=49042&st=0&#entry1294286

and click on "Corner Booth" and then sign in to watch the trial. When there are breaks in the trial, people can discuss the testimony. It's live blogging at it's best - and most fun.

By the way, we say Snape is not-guilty. But the testimony is fascinating - totally based on canon (it's got to be based on fact and not speculation). As I type, Hermione Granger is on the stand.