For the Record: It was the Episcopal Church and the Diocese of Virginia that sued the Virginia churches that voted to separate; we did not sue them. 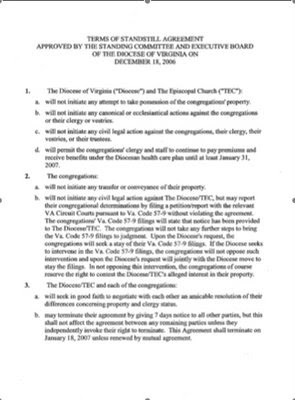 I have just learned from one of the Church of England bishops that Episcopal bishops are going around the Lambeth Conference and saying that it was the Virginia churches that sued the Diocese of Virginia and the Episcopal Church. That is false. Completely false. In fact, the voting took place at the request of the Bishop of Virginia and was clearly stated in his protocol which was followed by all eleven churches. We did not sue them - they sued us.

Let me say that again.

We did not sue them. They sued us - twice. The Diocese of Virginia sued 200 lay volunteers and their rectors and then Katharine Jefferts Schori did the same thing.

The lawsuits were filed suddenly and without warning after Bishop Lee pulled out of his own negotiations following our vote.

We never took the next step of transferring property because 1) we believed we all ready owned it and 2) we were going into negotiations with the diocese. That was where we stood.

Let me say that again. It was Katharine Jefferts Schori and Peter James Lee that sued 200 lay volunteers - men and women - in Virginia for voting as Bishop Lee's Protocol for Departing Congregations directed.

And I have never sued anyone.
Posted by Unknown at 12:53 PM

Quite right. For what it's worth, I've tried to spread this message with people I've talked to -- not that we stewards have a lot of clout! But every time that I hear some kind of positive message from TEC bishops I find myself thinking that it is difficult to listen to anyone who is suing fellow Christians -- calls for reconciliation and listening thus become hollow.

BB, I would expect nothing less from TEC. Tec is acting entirely within the bounds of behavior I expect they would exhibit. Unfortunate, but consistent.

take it for what it's worth