Sunday Wrap Up of Lambeth 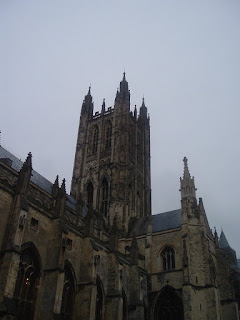 Just back from the final closing Eucharist at Canterbury Cathedral and we have a lot to post. Possibly one of the more interesting items is that several bishops report that when Rowan Williams finished his final presidential address, he was greeted by a rousing standing ovation by all. Well, almost all. Several non-American bishops report that Katharine Jefferts Schori did not join in the applause, but stood with her arms folded as the ovation continued, while a number of Episcopal bishops walked out.

Rowan Williams left the Big Top and came over to the Press Room where he made a statement and took questions. Another blogger and I got in quite a fierce (though friendly) debate about Rowan's remarks regarding the the "human rights" argument regarding ordination and same sex blessings and we'll be putting up our video of that press conference including the Q & A tonight. It seemed in our quarter that Rowan was advocating a kind of "don't ask, don't tell" policy. If a vicar wants to show "pastoral concern" in the privacy of his office and offer a blessing over gays and lesbians, that's one thing. But to do open and public rites and ordaining and consecrating those who are living in non-celibate partnered relationships was not exceptable and not an issue of human rights, he make that quite clear. That can't sit well with the activists here, while the "don't ask, don't tell" cannot sit well from those that are looking for biblical leadership from Canterbury.

But you will be able to see for yourself. I have photos and reflections from tonight, at the Cathedral and then a wonderful farewell dinner of friends at the "Parrot" - an English pub if there ever was one and we were joined by Bishop Mark Lawrence (who turns out with his wife to both be major Dylan fans - hoooray!) and Bishop Keith Ackerman for an evening of giving thanks in what has not been easy journey.

Before I get to work getting the video and photos up, though, I want to tell you one particular story about the Eucharist at Canterbury Cathedral tonight. I was sitting in the "quire" where I could see the Throne of Augustine. The last fifteen minutes of the service were extraordinary and highly unexpected.

Following the Post Communion prayer, the service turned to receiving the names of the Melanesian martyrs who were added to the names in the Chapel of Saints and Martyrs of Our Own Time. The Brotherhood was in attendance. 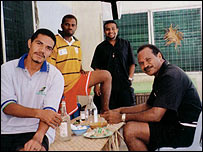 In 2003, seven members of an indigenous Anglican order of monks in the Solomon Islands were brutally murdered during ethnic conflict. You can read more about about what happened here.

Rowan Williams began by quoting Matthew 5:9, "Blessed are the peacemakers, for they will be called children of God." Then he read the names of the Melanesian martyrs and commended them to prayer, finishing by saying, "May they rest in peace," the congregation responded, "And rise in glory. Amen."

Then the singing began from the four religious communities of Melanesia, singing the Litany of the Saints and Martyrs of Melanesia, and walked in procession through nave and then through the choir, pass the Throne of St. Augustine and their voices echoed as the entire Cathedral grew still. As they passed me by, these very simple men in very simple attire, with one carrying the names of their brothers - tears just fell down my face. The stillness in the Cathedral and the sacrifice of these men was powerful. We were in the presence of holiness, of glory.

And then the Cathedral was silent.

The singing ended from somewhere in the vast expanse, there was silence. And then Rowan prayed, "go forth into the world in peace; be of good courage; hold fast that which is good; render to no one evil for evil; strengthen the fainthearted; support the weak; help the afflicted; honour everyone; love and serve the Lord, rejoicing in the power of the Holy Spirit; and the blessing of God almighty, the Father, the Son, and the Holy Spirit, be among you and remain with you always. Amen."

Then the Dean of Canterbury said, "The eleven went to Galilee, to the mountain to which Jesus had directed them. When they saw him, they worshipped him; but some doubted. And Jesus came and said to them, 'All authority in heaven and on earth has been given to me. Go therefore and make disciples of all nations, baptizing them in the name of the Father and of the Son and of the Holy Spirit, and teaching them to obey everything that I have commanded you. And remember, I am with you always, to the end of the age."

Oh dear - almost make me glad to have been Anglican

it seems that if nothing else was worth anything at Lambeth - perhaps that was.