"What are you, a Unitarian?" 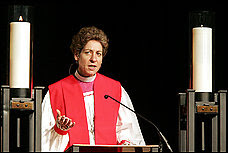 BB NOTE: Binky transcribes the pre-investiture NPR interview and what it reveals will knock your teeth out. Click on the headline above for the StandFirm posting of the entire interview. Got a note from ElfGirl last night and she couldn't believe it - and neither can we. So this is the person The Episcopal Church has chosen to lead "this current branch" of Anglicanism in the United States. The NPR interviewer exclaims in way we could not. Question: Is she trying to make matters worse?

RY: TIME Magazine asked you an interesting question, we thought, "Is belief in Jesus the only way to get to heaven?" And your answer, equally interesting, you said "We who practice the Christian tradition understand him as our vehicle to the divine. But for us to assume that God could not act in other ways is, I think, to put God in an awfully small box." And I read that and I said "What are you: a Unitarian?!?" [laughs] What are you-- that is another concern for people, because, they say Scripture says that Jesus says he was The Light and The Way and the only way to God the Father.

RY: So you're saying there are other ways to God.

KJS: Uhh... human communities have always searched for relationship that which is beyond them.. with the ultimate.. with the divine. For Christians, we say that our route to God is through Jesus. Uhh.. uh..that doesn't mean that a Hindu.. uh.. doesn't experience God except through Jesus. It-it-it says that Hindus and people of other faith traditions approach God through their.. own cultural contexts; they relate to God, they experience God in human relationships, as well as ones that transcend human relationships; and Christians would say those are our experiences of Jesus; of God through the experience of Jesus.

RY: It sounds like you're saying it's a parallel reality, but in another culture and language.

Special tip of the tinfoil hat to Elfgirl and Binky.
Posted by Unknown at 12:29 PM

I'm pretty sure that link to the video is broken.

Who knows? Maybe he is a Unitarian.

wycliff - I think the link needs to be "right clicked" and "downloaded" to work on RealPlayer. I downloaded it and then opened Real Player. I've updated the link so it includes these new instructions. Hope it works!

emerson avenger - where did you get that button? Completely cracked me up (not sure if that's what you meant, but it sure did!). ;-)

I got the button from a couple of now deeply disillusioned ex-Unitarian*Universalists from the Beaconsfied U*U congregation in Montreal. They were proudly evangelizing at the time. The button fell behind a piece of furniture near a window and got wet and rusted over time. I found it a few years later and began to wear it in protest to indicate my own profound disillusionment with U*Uism.

And yes it is supposed to be kinda funny in a serious kind of way. . . Glad you got a chuckle out of it.