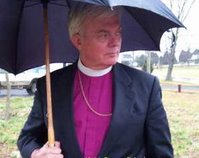 Latest reports indicate that Bishop Lee is feeling fine, very good news. Here is the latest from Patrick Getlein, Secretary of the Diocese of Virginia:

Shortly after 10 a.m. today Bishop Lee was released from St. Mary’s Hospital in Richmond, Virginia after a 24-hour observation period. As you know he was admitted there yesterday morning, Nov. 7, exhibiting symptoms of a mild stroke.

Following a battery of tests including MRI, EEG, CT scans and a carotid artery test, there has been no conclusive diagnosis. However, Bishop Lee says that the doctors are recording the incident as a Transient Ischemic Attack (TIA) though he explains that his symptoms were not fully characteristic of TIA.

I spoke with him this morning. He sounds great and says he feels fine. Though he has been ordered by doctors not to drive until the results of a final test are received on Friday, he is expected to attend a meeting of the Diocesan Executive Board on Thursday with the Standing Committee, regional deans and presidents in Northern Virginia. He will be driven by his clerk, Mr. Will Packard.

Thank you for your expressions of concern and your prayers.

Patrick N. Getlein
Secretary of the Diocese
Posted by Unknown at 12:29 PM

Email ThisBlogThis!Share to TwitterShare to FacebookShare to Pinterest
Labels: Diocese of Virginia