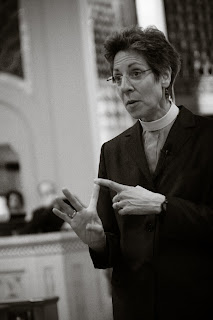 BB NOTE: "Bishop Jefferts Schori proposed two days of hearings to remove Bishop Robert W. Duncan of Pittsburgh permanently from the ordained ministry of The Episcopal Church for teaching that it is lawful for a diocese to withdraw from The Episcopal Church," the Living Church writes. Wow. There is so much in this assertion - the sheer authoritarian gall. I do remember being at Minneapolis after the vote was taken in the House of Bishops to affirm the Bishop of New Hampshire and the almost cultic-glee that filled the hallways. One is walking through the halls stunned by the events, and all around are people who just don't care. I also remember being in the House of Deputies in Columbus when Schori's name was announced as the new presiding bishop and the blood-curling screaming that followed. After a while, it all starts to look and feel very familiar.

I remember my mother started a Bible Study at the First Church of Christ Science (Christian Science) in Charleston, South Carolina in 1970. It was simply a Bible Study. Each Sunday before church started, the adults would meet and have a simple Bible Study. They'd read scripture and they'd talk about it and then go to the service.

Well, the Mother Church in Boston found out about it and told her to cease and desist immediately. Now that's authoritarian control - don't read, don't think, and certainly don't teach outside the strict center of control. When something threatens the authoritarian grasp for power, it must be removed - and it must be done quickly, lest anyone else start getting ideas of their own.

What this attempt by Schori and her handlers to insert an off-agenda item into the proceedings of the Episcopal House of Bishops meeting (starting this Thursday in Salt Lake City) illustrates is that they feel threatened - and they should be. By keeping it off the agenda until the last moment, they hoped to not give enough time for the opposition to organize. They think the bishops are so filled with fear and indifference that they will be like sheep and more than willing to watch one of their own taken to the slaughterhouse.

The Christian Science Mother Church was threatened by a woman doing a Bible Study, a woman who had devoutly spent her entire life in that church, as had her mother and her grandmother before her, who was diligent in bringing up her own children to follow the same Christian Science path.

What was the ultimate result of the intervention by the Mother Church? That incident led to the entire conversion of her family to re-examine Christian Science and turn to follow Jesus. After four generations in my mothers family, Christian Science came to an end. The entire family was baptized on Easter Sunday, 1975 - and those conversions continued on to include her own Christian Science mother. That intervention from Boston was the first clue for my mother that something was very very wrong in the structures of the Christian Science Church. And once that became apparent, it wasn't long before she took a long, hard look at the teaching itself.

Be careful what you wish for, Bishop Schori.

From The Living Church here.

In a memorandum to bishops, Bishop Jefferts Schori proposed two days of hearings to remove Bishop Robert W. Duncan of Pittsburgh permanently from the ordained ministry of The Episcopal Church for teaching that it is lawful for a diocese to withdraw from The Episcopal Church.

The revised scheduled calls for the Presiding Bishop’s council of advice to hold an “informal evening meeting to investigate the matter” on Sept. 17, with further discussion leading to a vote during the business meeting the following day.

“At that time, the house may, by majority vote of those present, grant or withhold its consent or decline to vote until a later time,” Bishop Jefferts Schori wrote. “In that regard, some have suggested that a vote not be taken until a later meeting of the house after the forthcoming convention of the diocese in early October, when Bishop Duncan’s intentions and actions can perhaps be viewed more clearly.”

Delegates to the convention of the Diocese of Pittsburgh will not consider a final vote to realign with the Anglican Church of the Southern Cone until Oct. 4. Bishop Jefferts Schori wrote that Bishop Duncan, by “encouraging the diocese to choose to leave” The Episcopal Church, had “abandoned the communion of this church by ‘an open renunciation of the… discipline… of this church’ within the meaning of Title IV, Canon 9, Section 1(i),” Bishop Jefferts Schori said.

Bishop Jefferts Schori defended the canonical process she outlines based on precedent and expediency. She also repeatedly reminds the bishops that any member may request a ruling, and that the chair may be overruled by a two-thirds vote under the House of Bishops’ bylaws.

“I concur with my chancellor and parliamentarian that any ambiguity in the canon should be resolved in favor of making this important provision work effectively, and that the discipline of the church should not be stymied because a majority of nearly a majority of voting bishops are no longer in active episcopal positions in the church and their attendance at meetings is hampered by age, health, economics, or interest in other legitimate pursuits,” she said.

Bishop Jefferts Schori may face a challenge on the legality of introducing new business so close to the start of what she has characterized as a “special meeting” of the House of Bishops. On Aug. 20, the agenda, dates and location for the Salt Lake City meeting were given to the bishops, with no mention of a hearing into the charges brought against Bishop Duncan. The first formal declaration by the Presiding Bishop that the bishops would decide whether or not to depose the Pittsburgh bishop came on Sept 12.

Whether the vote will take place is unclear, however, as the canons specifically forbid the Presiding Bishop from amending the agenda once she issues her call for a special session to review the Lambeth Conference.

Under Robert’s Rules of Order, which are cited as the authoritative source for conducting business under the House of Bishops’ rules of order, “only business mentioned in the call of a special meeting can be transacted at such a meeting.” As the Presiding Bishop did not include the hearing on Bishop Duncan in her agenda and her “call” of the special meeting, the rules of the House of Bishops would seem to forbid her from adding it to the agenda five days before the start of the meeting.

The House of Bishops’ rules also require 30 days notice. Rule XIX states, “except by a two-thirds vote of those present and voting, no member of the house may introduce a resolution at a special meeting unless the resolution has been circulated 30 days in advance to the members.”

Bishop Duncan said previously he will not be present for a hearing. For the deposition hearing and vote to be blocked, a point of order must be raised and seconded. Bishop Schori would then be asked to rule on whether her actions constitute a breach of order. If she rules against the appeal, it would require a two-thirds vote of the house to overrule her.

(The Rev.) George Conger and Steve Waring
Posted by Unknown at 11:49 AM

Does this mean I have abandoned the communion of The Episcopal Church because my announced agenda is contrary to 85% of the leadership?

I ran into a man this morning at the post office who likes our congregation -- but he will not attend again, or join, unless we leave the Episcopal Church. I wonder how many others like that are out there?

All that is missing in that B&W of Shori are a few winged monkeys in the background and her in a wide brimmed black hat. Scary.

How great thou art!

The "how in the world did we get here" question has been analyzed for a while now. It still looks like it began many years ago and the end result is the creation of an ineffectual HOB and generations of ineffectual priests indoctrinated with the liberal mindset.

It is probably impossible to change a structure thus formed and one which continues to be fed by the liberal seminaries.

The liberal death spiral has a great deal of momentum, and appears impossible to change.

If we see more shoulder shrugging indifference from the H.O.B., it might be another sign from the pilots of the spaceship TEC for the crew to bail out.

The "Oven-Mitted One" is about to stuff Bishop Duncan in her fiery oven. Rationale? "He leads others to think that we're wrong, and leaves them to decide".

I would truly, honestly tremble if I were in the HOB. The wrath of God will be against those who ruin this good man because he doesn't play well with liars and hypocrites.

I would tremble for their own judgment if I were them. It's being recorded.

allen,
+Duncan may be condemned by the HOB but he will not be ruined. He serves a higher Court...

“I concur with my chancellor and parliamentarian that any ambiguity in the canon should be resolved in favor of making this important provision work effectively, and that the discipline of the church should not be stymied because a majority of nearly a majority of voting bishops are no longer in active episcopal positions in the church and their attendance at meetings is hampered by age, health, economics, or interest in other legitimate pursuits,” she said.

Take note my friens still in TEC - this is the means by which every canon will be ignored to bring you under the complete control of this cabal. And you're going to sign your property deed over to them too?