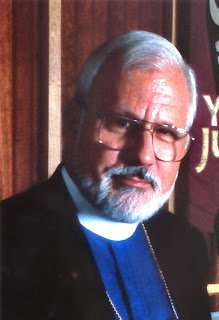 Bishop John W. Howe of the Diocese of Central Florida writes of the Episcopal House of Bishops took yesterday to oust the Bishop of Pittsburgh. Via e-mail.

I suspect that by the time I have finished composing this post you will have already learned that the House of Bishops has this afternoon voted to depose Bishop Robert Duncan of the Diocese of Pittsburgh for "abandoning the communion of this Church by an open renunciation of the Doctrine, Discipline or Worship of this Church."

The vote was 88 in favor of deposition, 35 against, and there were 4 abstentions. I voted against. I want to share with you my impressions of what has just happened.

In particular, it is his contention (and the PB told us in her letter last week that it would be her ruling) that the House may move to depose without the necessity of the PB first imposing inhibition on the Bishop in question (an action that would require the consent of the three most senior active Bishops), and secondly, he contends that "a majority of all those entitled to vote" refers to those PRESENT at the HOB meeting, and not to ALL the Bishops of the House, whether present or not.

My own conviction is that on both of these points Mr. Beers' interpretation is incorrect, as both I and our Standing Committee have previously stated (following similar depositions last spring).

This afternoon I offered this argument: "I want to compare what Mr. Beers said last night to the argument that many have advanced in favor of ordaining persons directly to the priesthood - without the requirement that they become deacons first. Cogent arguments can be made for that position, but that is not what our canons stipulate. They say a person SHALL be a deacon first, and only afterward may they be ordained priest. You can wish it were otherwise, and you can speculate all you like about intent, but if you want to change things - change the canons.

"Similarly, our canons are clear - not at all 'ambiguous' - however much you might not like them. 'A Bishop SHALL be inhibited, with the consent of the three senior Bishops,' before deposition can be imposed. The way to change that is to change the canons. Bishop Bob Duncan has not been inhibited, and he cannot be deposed."

However, in today's meeting both that ruling and the one regarding how much of a majority is required for a deposition were upheld by a vote of the House. (It would have required a 2/3 majority to overturn them, and the votes were not even close to a simple majority.)

I told the Diocesan Board last week that I was contemplating the possibility of disassociating myself from the vote altogether, in that I believed it was canonically illegitimate. However, with the PB's rulings being upheld by the House (and having no other, final, authority to determine the matter), I saw no other course but to vote No with regard to the deposition.

The discussion and debate today lasted across both this morning's and this afternoon's sessions, for a total of approximately six hours. There was a good deal of sentiment expressed that any action by this House should not occur until after the Diocese of Pittsburgh has voted for a second time to remove its accession to the Constitution and Canons of The Episcopal Church, a matter which is scheduled to be before its Convention within the next couple of weeks. A number of people argued that until/unless that decision becomes final "abandonment" has not actually occurred, either by the Bishop or by the Diocese as a whole.

Others, however, argued that in allowing and urging the Diocese to withdraw its accession, and thus to attempt to remove itself from The Episcopal Church, Bishop Duncan has long since violated and "abandoned" his loyalty to The Episcopal Church. Some of the Bishops who are also lawyers argued that the case law of Pennsylvania would make it more difficult for The Episcopal Church to press its case if we delayed our action until after Pittsburgh's Diocesan Convention.

My sense of the discussion today is that it was respectful, painful, and deeply tinged with sadness. There was a good deal of recognition and concern that many, both within The Episcopal Church and across the Anglican Communion, will see today's action as precipitous, pre-emptive, and vindictive. Some expressed the concern that this may well solidify the previously undecided in Pittsburgh to join in the support of Bishop Duncan, by making him, in effect, a "martyr."

In the end there was a Roll Call vote, and, as I stated above, 88 voted in favor of deposition, 35 against, and there were 4 abstentions. A simple majority was needed to depose (under the PB's ruling), but in fact slightly more than 2/3 voted to depose.

Bob Duncan is my friend, and Pittsburgh was my Diocese from 1972 to 1976. Bob and I have not always agreed, but we have been on the same side of most of the "issues," and I believe him to be a fearless and courageous contender for the Faith. I believe this is a very sad day for the Church, and I find myself in mourning.
Posted by Unknown at 11:56 AM

Mourning? You should be, over the death of your courage and willingness to like Bishop Duncan actually contend for the Faith. I find bishop Howe's informational letters, more therapy for him, than contributing anything positive to the situation.

Abishai,
I have to agree with you. Bishop Howe clearly does not understand how the code of law interfaces with the canons.