Bishop of Western Kansas clarifies his decision not to attend Lambeth 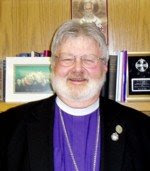 The Rt. Rev. James M. Adams, Jr., Bishop of the Episcopal Diocese of Western Kansas, has clarified his reasons not to attend the Lambeth Conference in Canterbury, England, BabyBlueOnline has learned.

Bishop Adams made it clear in an e-mail that while he chose to attend GAFCON in Jerusalem out of his own pocket to celebrate his sixtieth birthday, he "would not spend any of the Church's money on a three week retreat in England, which even the ABC (Archbishop of Canterbury) said would not work to solve our problems, when I could not even afford priests for all my congregations."

"I would love a retreat in England," Bishop Adams wrote, "but not at the expense of my Diocese or the Church at all." Instead he personally paid out of his own pocket all his expenses to GAFCON.
Posted by Unknown at 10:43 PM