Meanwhile, in a dark corner in Grand Central Station ... 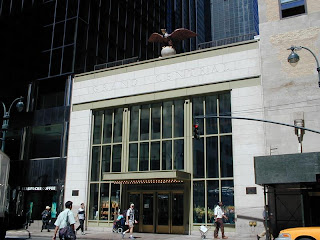 "Good job, Jim," she said over coffee at the Grand Central Starbucks, waving the sugar away, but taking one of the delicious tarts offered to her by the visitor at her table. Sweetness really was not her cup of tea, anyway, but the lemon and pistachio tarts were quite an indulgence and she took two more from the offered plate. "I see that they are all quite diverted by the recent unpleasantness over there and are not exactly praying--excuse me, aren't paying much attention to what's going on here, thank the stars." The visitor smiled.

"That is the quite the point, I agree," Jim said, his voice booming over the cell as though he was Father Christmas. "We thought that particular bit about sharia law was quite helpful and it's proved to be quite an asset. Do you know he's a bit of an expert on the whole thing, who'd have guessed, but it's apparent his enthusiasm got the best of him. I believe Rochester has all ready popped his cork. Do you know the Archbishop was actually booed outside a church over the weekend?"

"Splendid!" the visitor at her table suddenly said, for it was not easy to miss Jim's voice though he was a thousand miles away.

"Now, Jim," she said, pulling out a sheet of paper. Let us read the proposed canon change aloud to you and we may glean your expertise on how we shall continue this campaign, it's going quite well, we must say. Those unmentionables over at that unmentionable website notwithstanding" she couldn't even bring herself to say its name, "though it seems that Harmon may also be on it now, that man."

"All right now, listen to this - it's the final draft and the Executive Council is all set down in Quito and ready to go."

"Are you taking the train to South America?" Jim asked her with a chuckle.

"Not funny," she said curtly, "what do you expect we're going to do, go by sleigh?" She heard him laugh heartily. Her visitor did not laugh. "Yes, well, let us read you the final draft, we think it will do the trick."

"Proposed" Canon IV.19.2 reads as follows: "No member of this Church, whether lay or ordained, may seek to have the Constitution and Canons of this Church interpreted by a secular court, or resort to a secular court to address a dispute arising under the Constitution and Canons, or for any purpose of delay, hindrance, review or otherwise affecting any proceeding under this Title."

She finished reading and paused, waiting for a response from Jim. Her visitor twitched.

"Jim?" she finally said, wondering if the transatlantic connection had gone dead or Rochester had suddenly be appointed. "Jim?"

"Excellent," Jim whispered, as though waking from a deep sleep and no longer sounding like Father Christmas. "Beers never misses."

"He learned from the best," she agreed.

"Ah!" Jim exclaimed. "The Master of Disaster! Or should we say The Mistress?"

"Indeed," she said and sipped her coffee, no longer hot, looking across the table at the Visitor, who smiled sweetly if somewhat coldly, offering her more of the Turkish Delight.

BB NOTE: Thanks to the sharp eyes of the Unmentionable Website, Jackie has found the most outrageous "proposed" canon (is this how the Dennis Canon was passed as well?). Indeed, it's the real deal and no one needs to serve Turkish Delight before reading it. So much for equal justice under the law. What's next? Episcopal Tribunals? Gitmo? I mean, no one expects The Spanish Inquisition. Do they?

BB--Great writing. You and Chris Johnson can do a dueling pens thing. Please go on.

Wait... I thought Schori was Jadis, not Edmund.