Ya want fries with that? 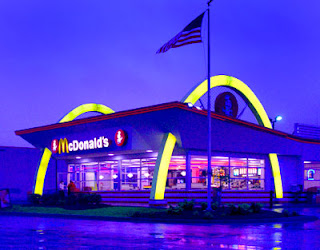 Brad Drell, who is one of those who continues to hang in there and slug away (he's been elected a deputy again to General Convention 2009) does not mince words over the attempt to divide the Daughters of the King (one of the great ironies is that the innovators call those who will stand against them the dividers - or worse, the schismatics, as though their own actions have nothing to do with it). Here's an excerpt from Brad Drell's post:

I hope that every member of the Daughters of the King who has perhaps held onto an idea that, come what may in the Episcopal Church, the commitment of this organization to Christ is unflappable, and who could not imagine that anyone in the Episcopal Church would declare war on such a benevolent and spiritually uplifting organization as this. Think again. The first female Presiding Bishop, rather than supporting this organization, is declaring war on it.

Of course, this is not surprising to me. It is an organization that acknowledges the Kingship (read male leadership) of the actual person of Jesus Christ, not some etherial non-sexual Christ. This is incompatible with the Episcopal Church of today.

I had not seriously considered the whispering campaign that could ensue if DOK did not embrace the TEC political agenda (it's not theological). I also did not consider that TEC is now in the business of protecting the "branding" of the Episcopal Church. I've been musing that they are looking at the institution of the Episcopal Church as being like a corporation with franchises, like McDonalds or Burger King. They could no more tolerate Anglicans in their midst then if McDonalds started selling Whoppers. Well, they are selling whoppers all right, but I don't think they got them from Burger King.

Read the rest of Brad's posting here.
Posted by Unknown at 12:23 PM

"Branding" is just another word for "loyalty" in the TEC playbook. And it's all about the loyalty.

Maybe the new 'shadow group' could charter themselves under the name, Daughters of the Queen, which would be more congruent with the new TEC philosophy.

I find the statements about TEC to be totally heretical. Who appointed YOU God? God has not changed. Episcopalians are not afraid to think, thank God.

I do hope Episcopalians are thinking, and thinking very hard about what is happening to the church, and are not satisfied to be biblically illiterate.

In what regard do you feel TEC is Biblically (one capitolizes the word Bible) illiterate? I would love to have an intelligent conversation with you about this, Bible based.

My concern is that the laity - the typical Episcopalian in the pew is not biblically (and alas, the word "biblically" is with a little b) literate - they might know their Prayer Book, but they don't know the Bible, it's quite possible that they've never read the entire book, not even once, much less be able to discuss it or illustrate how the Scriptures are true. Episcopalians have become quite clerical-centered. It seems as though most Episcopalians are not meeting in regular small group inductive Bible studies where they would have the opportunity to search the scriptures for themselves and then hold the clergy accountable. A biblically literate laity does not leave it to the clerical orders to explain the Scriptures. And biblically literate clergy training up a biblically literate laity is life changing.

When I was President of Region VII in the Diocese of Virginia, as an experiment at a Regional Council meeting I led an inductive Bible Study to open the meeting. The progressive clergy nearly lost their lunch. They were silent and sullen, and when they spoke up it was to disparage Paul who wrote the letter we were looking, I can remember one assistant rector answering a question by saying, "Well, Paul alleges that ..." She didn't even trust what Paul was saying. It was just Paul's opinion, it didn't mean it was true. The laity however, whether they were from orthodox, centrist, or progressive parishes really got into it. There were questions that could be contemplated and answered no matter how much you knew the Bible. What we were doing was zeroing in on the passage - which I got from the daily lectionary - and studying what it said, what Paul meant, and how do we apply it to our lives?

It was a very illuminating moment. I could see that the laity were hungry for the Scriptures - studying the Bible is exciting and transforming and life-changing. An Episcopal laity that knows the Scriptures inside and out, is a laity equipped to discern and pray diligently, steadfastly, and robustly. Becoming biblically literate means that the words are not just in our head, but reside in our hearts. What is it the collect says, that we read, mark, learn and inwardly digest the Scriptures? We memorize Scripture, we sing Scripture, we preach Scripture, we live Scripture and in those pages we might the Living Word - Jesus Christ, Risen.

And now from Jude, beginning at the third verse, because it came to mind as I was writing:

Dear friends, although I was very eager to write to you about the salvation we share, I felt I had to write and urge you to contend for the faith that was once for all entrusted to the saints. For certain men whose condemnation was written about long ago have secretly slipped in among you. They are godless men, who change the grace of our God into a license for immorality and deny Jesus Christ our only Sovereign and Lord.

Though you already know all this, I want to remind you that the Lord delivered his people out of Egypt, but later destroyed those who did not believe. And the angels who did not keep their positions of authority but abandoned their own home—these he has kept in darkness, bound with everlasting chains for judgment on the great Day. In a similar way, Sodom and Gomorrah and the surrounding towns gave themselves up to sexual immorality and perversion. They serve as an example of those who suffer the punishment of eternal fire.

In the very same way, these dreamers pollute their own bodies, reject authority and slander celestial beings. But even the archangel Michael, when he was disputing with the devil about the body of Moses, did not dare to bring a slanderous accusation against him, but said, "The Lord rebuke you!" Yet these men speak abusively against whatever they do not understand; and what things they do understand by instinct, like unreasoning animals—these are the very things that destroy them.

Woe to them! They have taken the way of Cain; they have rushed for profit into Balaam's error; they have been destroyed in Korah's rebellion.

These men are blemishes at your love feasts, eating with you without the slightest qualm—shepherds who feed only themselves. They are clouds without rain, blown along by the wind; autumn trees, without fruit and uprooted—twice dead. They are wild waves of the sea, foaming up their shame; wandering stars, for whom blackest darkness has been reserved forever.

Enoch, the seventh from Adam, prophesied about these men: "See, the Lord is coming with thousands upon thousands of his holy ones to judge everyone, and to convict all the ungodly of all the ungodly acts they have done in the ungodly way, and of all the harsh words ungodly sinners have spoken against him." These men are grumblers and faultfinders; they follow their own evil desires; they boast about themselves and flatter others for their own advantage.

But, dear friends, remember what the apostles of our Lord Jesus Christ foretold. They said to you, "In the last times there will be scoffers who will follow their own ungodly desires." These are the men who divide you, who follow mere natural instincts and do not have the Spirit.

But you, dear friends, build yourselves up in your most holy faith and pray in the Holy Spirit. Keep yourselves in God's love as you wait for the mercy of our Lord Jesus Christ to bring you to eternal life.

Be merciful to those who doubt; snatch others from the fire and save them; to others show mercy, mixed with fear—hating even the clothing stained by corrupted flesh.

To him who is able to keep you from falling and to present you before his glorious presence without fault and with great joy— to the only God our Savior be glory, majesty, power and authority, through Jesus Christ our Lord, before all ages, now and forevermore! Amen.

How would most Episcopalians in teh pews react to this passage? Would they stop and study it? Would they be able to explain what it means and how we should it apply it our lives? What is hard about it? What is challenging about it? What do we take away from it? Which part should memorize? How should this passage live in our hearts? Is it true?