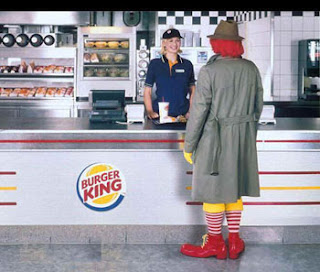 In a stunning development today, the chairman of McDonald's announced that in an effort to support culinary pluralism, McDonald's will start selling Burger King Whoppers alongside McDonald's Big Macs in its thousands of franchises in the United States and around the world.

"We recognize that we should not separate the populations between the so-called pro-Big Macs and pro-Whoppers constituencies and just sell both Big Macs and Whoppers together," he said at a press conference held outside a Burger King franchise with Ronald McDonald beside him, waving to Burger King patrons as they arrived in the parking lot. "After all," he added, "it's just a hamburger."

Patrons will be given the choice of purchasing either a Big Mac or a Whopper. But they will not be permitted to buy both, citing accounting issues.

The Chairman of Burger King was delighted at the announcement, insisting though that all revenues for Whoppers sold at McDonald's should be accredited to Burger King. "It's one thing for McDonald's to sell our very delicious and tasty Whoppers," the Burger King Chairman said, "it's quite another thing for McDonald's to profit off of our very delicious and tasty Whoppers. We'll see who the real king is!" He did indicate though that he was not happy with Ronald McDonald waving at his customers in the Burger King parking lot, declaring Burger King parking lots a "no-go" zone for clowns selling Big Macs.

BREAKING: McDonald's stock dropped down to a bottom drawer $2 a share today, indicating that a massive buyout by Burger King could be imminent. When asked about the possibilities of a buyout, the Burger King chairman said that McDonald's had ideal franchise locations for Burger King to take over. But he also talked about confidence in the product. "If you don't believe in your hamburger," he said "you should get out of the business."

I think we ought to be excited and enthused by the notion that our Big Macs might just find new life and new vigour if we were prepared very consciously and prayerfully to make the sort of commitments to each other within the burger world that involved the willingness to be converted by our encounter with a Whopper, and therefore to see our relations within the burger world not as a constant struggle of power and leverage but something deeper.

Sorry, I'm won't be satisfied until they add a Seven-Layer Taco Supreme (Taco Bell).
And a Polish Dog with Kraut (Der Weineschnitzel).
And a...

There is a KFC/Taco Bell/Pizza Hut store about 1 mile from where I am writing.