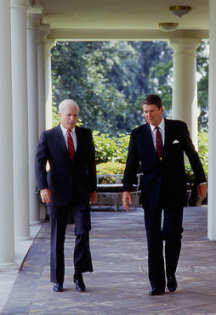 I am mulling over writing about the upset over what it means to be a true conservative in the current presidential race. As some of you may know, the very first political thing I ever did was volunteer to run the copier at the Reagan/Bush '80 headquarters in Washington in 1980. Volunteering there got me a ticket to the big bash on election night at what is now the Omni Shoreham. It was a night I will never forget. But "talk radio" conservatives are in an uproar regarding McCain's conservative credentials - and while there is plenty to be an uproar about, I am far more concerned about these wacked-out attitudes coming from what appear to be burned-out self-absorbed talk-radio hosts (not you, Fred & Andy). I'm going to write about this later tonight. But what does come to mind, in the meantime, is that these rabid voices have always been around Reagan's shoes and they used to complain that anyone who didn't agree with their rabid-style no prisoners-taken style were "squishes." In fact, at one point they thought Reagan himself was a squish and started a "Let Reagan be Reagan" campaign (see, we haven't forgotten). Well guess what - it's time for the real squishes to get squashed. Stay tuned.

Because they are grateful.

No matter what happens, the gratitude can never be squashed out of them. They can have bursts of temper - Reagan certainly did. But it never squashes their joy. It bursts out sometimes in the most surprising ways and at the most surprising times. And just what are they so grateful about?

They are grateful that they were lucky enough to be born in America.
Posted by Unknown at 12:53 PM

My first political activity was stamping large postcards for Richard Nixon; a memory this is seared, I tell you, seared into my memory. I too worry about the conflictions many are feeling concerning McCain, and rightfully so. But if I was starving and had to choose between eating blood pudding and poison ivy, I'd go for the pudding, same thing with McCain vs. Obama/Clinton; accept the bad taste and avoid the nasty rash.

BB: Good point. It's all about what we've got here in America, and what we can so easily lose.
By the way, the past tense of 'squash' is 'squooshed'. Think of well-fed caterpillars crossing the road or Twinkies at the bottom of your lunch bag.

My son still has an autographed photo of Bob Dole in his room. He cried when Clinton beat him. He was the President of his HS young Republican club for three years. He's a good kid.

On another note: What the heck is wrong with your Church Leaders? The occasional lurking and now even more puzzled Catholic:

I've not been viewing this blog for more than a month and this post makes it all worthwhile. I have been greatly saddened in the last couple of weeks with the rigid stance of the 'Right Wing' of the Republican Party. I think we now see that the Right Wing is broken and never has been a true part of the GOP. It appears they have just been using us for their own rigid ends.

Many say the same about the “break away dissidents” from the Episcopal Church.

The right wing has been grossly disappointed by the spending Republicans and by a President who did little to stop it or address an immigration policy that addresses Security before ‘amnesty.’

They are afraid of the same in McCain -- with good reason -- John isn’t the most stable or dependable conservative the Senate could offer.

That being said, as my son pointed out, most will come around in time.

I do agree it is sad to see, and I don’t agree with the tantrum. But there are good reasons for it.

Gosh, I feel old. My first political activity was handing out bumper stickers for Goldwater as a TAR - Teen Age Republican. Do TAR's still exist?