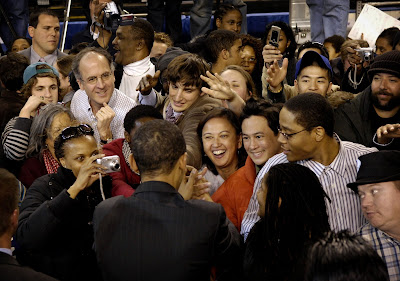 We've put this photo up for deeply sentimental reasons. As some of our cafe regulars know, I have a tendency to call one of the candidates for the Democratic nomination for president "Barry." Some have gotten a bit bent out of shape over it, but that was the name he was known by when we all lived in Hawaii and graduating from high school in 1979. One of my best friends in junior and senior high school was his lab partner at Punahou and it was her parents who originally told me that it was Barry who was running for president, a big surprise.

Here's a photo taken just a few weeks ago in Baltimore during the primaries where Senator Obama and my old friend had a short reunion in the crowd after nearly three decades (they both went to Occidental College after high school as well) and this photograph was taken at the moment he recognized her and remembered her, calling her by her first name in a flood of memories. Today she is an assistant principle at a ethnic diverse elementary school in the Baltimore area where she lives with her family, a long way from Hawaii. We must give him big-time points for remembering his old friend. Aloha ke akua. And to all you kids out there, do your chemistry and science labs. You just never know.

So we send out this long-distance dedication, yes, to Senator Obama, to my old friend now in Baltimore training up the next generation, and to all who take the risk to do something more than anyone ever expected.

Email ThisBlogThis!Share to TwitterShare to FacebookShare to Pinterest
Labels: Music and Arts

Talk about shortening the six degrees of separation! Great story. You are always full of surprises.

Wonderful story and great photo! I know she'll always treasure it -- was it a friend who was in just the right position to take the photo?

I believe the photo was taken by and appeared in the Baltimore Sun.

All is forgiven BB, I wondered if there was a personal Hawaii connection. I too, would call a high school friend by the name I knew him. I haven't been this excited about a presidential candidate since JFK.

This is an odd candidacy. The man has inspired people to politics that I'd never suspect. I'm being pushed from friends of long ago who are pretty politically apathetic or marginalized (their view of evil GOP didn't surprise me, but they view Clinton in the same tones).

This election process is very odd. My usual gung-ho are pretty unhappy about all three front-runners in the news & those who never talk politics are excited about "Barry" (I never heard you say that one before).