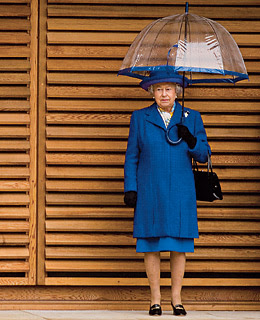 The Times of London reports:

The Queen was said to be worried about the continuing controversy surrounding Dr Rowan Williams’ belief that it was “unavoidable” that aspects of Sharia would be incorporated into the English legal system.

The Times has learnt that the Prince of Wales has already distanced himself from the Archbishop’s speech last week, fearing that his comments have damaged multi-faith relations.

According to The Daily Telegraph today, the Queen is also distressed over the controversy which she fears threatens to undermine the authority of the Archbishop and damage the Church of England, which already faces schism over homosexual clergy.

A royal source told the newspaper: “I have no idea what her view is on what the Archbishop said about Sharia. But the Queen is worried, coming at such a difficult time in the Church’s history, that the fallout may sap the authority of the Church.”

The Queen, as Supreme Governor of the Church of England, is the only person with the power to dismiss the Archbishop of Canterbury, but she would not act unless instructed to by the Prime Minister.

However, Dr Williams’ position would become untenable if it became known that he had lost the monarch’s confidence.

The Prince of Wales, a champion of good relations with Islam, has told friends he is concerned that the Archbishop’s speech is in danger of being taken out of context and distilled into scaremongering headlines.

The Prince fears that the misinterpretation of the Archbishop’s comments that Sharia was inevitable in Britain could harm relations with Islam and the Islamic world.

The Archbishop admitted on Monday that his intervention on the issue had been “clumsy" but refused to back down. He apologised to the Church of England for any “misleading choice of words” but made clear that he stood by his right to tackle such issues.

The Queen’s affection for the Commonwealth is well known and many Commonwealth countries with large Muslim populations, such as Nigeria, are incredulous at the Archbishop’s apparent appeasement of Islam.

The Queen is reported to have intervened previously in Anglican affairs over the appointment of an openly homosexual priest as the Bishop of Reading in 2003. She is said to have twice raised the issue with Tony Blair, then the Prime Minister.

Read the whole thing here.
Posted by Unknown at 1:32 PM