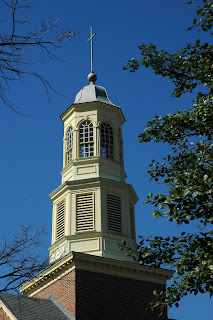 The following letter was sent to all the ADV churches following the hearing on Friday, August 13.

As you may have heard, we had a preliminary hearing on Friday, August 10, in court, at which the court heard arguments on our demurrers and pleas in bar. (Our demurrer asserted that even if everything The Episcopal Church claims is true, they still would have no case. The plea in bar argued that vestry members are immune from suit for actions taken in an official capacity as volunteers).

After extensive argument over the plea of statutory immunity, the court was prepared to rule but suggested that the parties work out an agreement. After recess, the Diocese of Virginia and The Episcopal Church agreed to dismiss all of the vestry members and rectors as defendants without prejudice and the individuals agreed to honor any determination of the court regarding the plaintiffs’ property claims, subject to their rights of appeal of any adverse ruling.

“We are appreciative that after all these months, our volunteer vestry members and our pastoral leadership are no longer named defendants in lawsuit filed by the Diocese and The Episcopal Church,” said Tom Wilson, Senior Warden of The Falls Church, and Chairman of the Anglican District of Virginia Board of Directors.

However, before those claims proceed to trial, the court has scheduled a hearing later this year to determine whether or not the claims filed by the Virginia churches under the Virginia Division Statute preempt the property claims of The Episcopal Church and the Diocese. If the court rules in favor of the churches under the Virginia Division Statute, that finding will be dispositive (which means that there would be no reason to proceed with the property claims made by the Diocese and The Episcopal Church).

What does all of this mean? Our legal team will be parsing every sentence of Judge Bellows’ rulings for some time, but we should keep in mind that these are preliminary skirmishes in a long battle. Since football season is about to begin, I can’t help but use a couple of analogies…

Our demurrer was, frankly, a long shot. Our legal team has told us that, as a practical matter, it is very rare for a judge to dismiss an entire case at this preliminary stage, particularly one with such national visibility. But it was worth a try. Think of it as a long incomplete pass.

We can think of the plea in bar as a touchdown – very good news, but it is still the first quarter of the game. And we must remember that our trustees are still named as defendants, although no claim of personal liability is asserted.

We still have a long way to go, and we still need prayer! We appreciate your support, encouragement and prayer throughout this process.

From the Anglican District of Virginia.

PM UPDATE: The ADV has issued this press release this evening. You can read it all here.
Posted by Unknown at 11:45 AM

And of course TEC is going to reimburse the legal fees incurred by those volunteers. Nah, didn't think so. One never knows about courts, but it might have been better, given the strength of the law, to get this on the record as being something which TEC can't do.

It is VERY strange that ENS & ADV have basically the same press release (understandably accenting on area or another), but it's a very rare day!

It sounds as if the judge was very willing to rule on a vengeance suit (my experience they don't like nastiness) but more than willing to listen to logical arguments. A case this size he'd be probably in trouble if he didn't.

Now it's just a boring property dispute between divorcing entities.