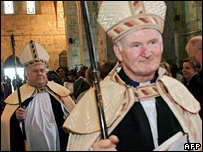 Ten Anglican primates or their representatives were reported to have been participants or in attendance at the service, which was estimated to have lasted nearly five hours. Bishop Robert Duncan of Pittsburgh and Bishop Jack Iker of Fort Worth were present, as were Bishop Martyn Minns of the Convocation of Anglicans in North America (CANA) and Bishop Charles Murphy of the Anglican Mission in the Americas (AMiA).

UPDATE FROM THE LONDON TIMES: The worldwide Anglican Church took a further step towards schism over homosexuality today with the ordination of two American Bishops to pastor to conservative US Anglicans under the jurisdiction of Kenya.

The Right Rev William Murdoch and the Right Rev Bill Atwood were consecrated at All Saints Cathedral in Nairobu by Kenya's Archbishop Benjamin Nzimbi.

The ordinations are valid but are expected to be counted as "irregular" by Lambeth Palace in London, placing the two outside the officially-recognised Anglican hierarchy. Nonetheless, the Archbishop of Canterbury, Dr Rowan Williams, will come under pressure from conservatives to invite the two new bishops to next year's Lambeth Conference.

In a significant indication of how the divisions transcend national church disputes, one leading evangelical English bishop today recognised and welcomed the ordinations. The Bishop of Rochester, Dr Michael Nazir-Ali, headed a list of more than 30 members of the Church of England's General Synod who sent a message to the two new bishops backing their episcopal ministry, even though acknowledging it is "out of the ordinary".

They said: "You will represent vibrant and growing Churches in Africa in their love and care for those in the United States who are suffering for their commitment to the faith once delivered to the saints, in the face of a determined capitulation by The Episcopal Church to the forces of contemporary North American culture.

"We see in your ministry a wonderful expression of the Gospel promise that there is neither Jew nor Greek, slave nor free, male nor female, but all are one in Christ Jesus. For African Christians who live in economically poorer countries are taking considerable risks in their relations with powerful institutions in order to care for American Christians in economically privileged countries.

"Your pathway is into the unknown. The way is strewn with pitfalls. Only Jesus will keep you in the way. Into his hands we commit you as you lead and teach his people in the American corner of his vineyard."

At the service, attended by ten primates from the Global South bloc of conservative African, Asian and Latin American churches, the two men pledged to serve the international interests of the Anglican Church of Kenya and of the congregations in North America that have rejected the care of their own, liberal bishiops and opted for Kenyan jurisdiction.

Archbishop Nzimbi said: “It is evident that the conflicts in the communion affect us all and we have a responsibility to address the areas that we are able to impact."

The conflict in the Anglican Church, a communion of 77 million souls with the Church of England's Archbishop of Canterbury as "primus inter pares", has been simmering under the surface during the past decades of revisitionist liberal theology but exploded into schismatic fury after The Episcopal Church in the US consecrated Gene Robinson, an openly gay pastor, as bishop of New Hampshire in 2003.

The Archbishop of the West Indies, Dr Drexel Gomez, who is a leading Global South Anglo-Catholic Primate, said: “The gospel of our Lord is clear in its teaching and must take precedence over our culture. The issue is not primarily one of sexuality, but one which seeks to answer the following question: Which relationship corresponds to God’s ordering of life?”

BBC Reporting: Kenya's Anglican Church has consecrated two US bishops in a move likely to deepen a bitter row over homosexuality.

Bill Murdoch, of Massachusetts, and Bill Atwood, of Texas, will be answerable to the Kenyan Church, although they will serve in the US.

They left the US branch of the Anglican Church - the Episcopal Church - after it consecrated an openly gay bishop.

...The two Americans were consecrated at a service at All Saints Cathedral in Nairobi by Archbishop Benjamin Nzimbi.

They vowed to "serve the international interests of the Anglican Church of Kenya, to serve clergy and congregations in North America under the Kenyan jurisdiction".

The ceremony was watched by a huge congregation of Kenyans, by archbishops and bishops from across Africa, and by the men's friends and supporters from the US.