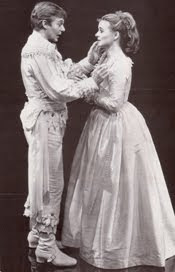 Thanks to BDP on Facebook, this flash of an episode of Frasier was posted featuring (now) Sir Derek Jacobi. I've been a long-time fan of Sir Derek stretching from when I first saw him onstage as both Cyrano de Bergerac and as Benedict in Much Ado About Nothing with the Royal Shakespeare Company in Straford-upon-Avon during my junior year in college in England. He'd play Cyrano for the matinee and Benedict for the evening performance. He went on to win a Tony for his performance of Benedict on Broadway. I saw him play the part several times in both New York and DC where I was able to meet him backstage at the Kennedy Center. 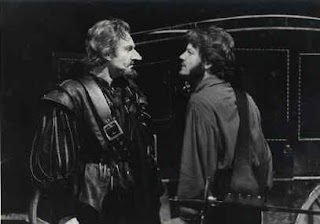 Imagine two more different characters than Cyrano and Benedict - it was quite feat to play the two parts in the same tour and often on the same day.

This hilarious parody of himself playing a scene from Hamlet in the video above is simply priceless. He is indeed satirizing himself - no small feat all on its own. He is well-known for his distinguished interpretation of Hamlet that makes the language of Shakespeare seem effortless, as though he is just making up the words as they just happened to pop into his own head. His performance had a profound affect on younger actors who followed, including Kenneth Branagh who would later go on to direct the both of them in Henry V and Dead Again, as well as Branagh's own Hamlet.

I've seen him on stage several times in other productions over the years, some good, some misses, but I confess the last time I saw him was in a play in London a few years ago and, well, I did have terrific seats not far from center stage but had not been off the plane very long from DC and fell sound to sleep in the middle of his performance. Out cold. I couldn't believe it when I woke up as the cast was taking their final bows and I opened my eyes and there he was. Not one of my more stellar moments.

Today he is well known for playing I, Claudius, as well as his mystery series based on the Cadfael novels. But here he is in early days presenting his unforgettable and powerfully understated (unlike the Fraiser parody) performance of Act 3, Scene 1 from Hamlet:

I have not seen him in live productions, but like him in Cadfael and the Branagh films.

Hamlet is one of my favourite theatre shows. I know all the scenes by heart so it was nice to remember again in your post. Thanks for bringing back some fond memories about Hamlet . This weekend I’m going to visit my sister and I've compared tickets prices tix for free before via this:
http://www.ticketwood.com
So I'll be analyzing as well as enjoying the show.