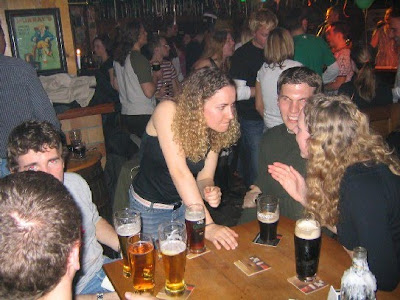 We've got some fascinating conversations going on at a couple of tables at the Cafe. We may be in the closing days of summer, but things are pretty hot here at the Cafe.

Finally, over at this table is the discussion is about The Episcopal Church collective. Note on that last one, I was at a dinner party the other night where we had some, shall I say, rather interesting guests present. We spent quite a considerable time discussing a particular quote from Bishop Schori's original sermon at General Convention:

"stewards are wardens of the styes – keepers of the pigpens. We’re beginning to notice that our global garden increasingly resembles an odorous sty. But it’s not pigs who are the problem – they are neat and tidy if they have enough space. The problem is with their keepers, who see the pigs only as bacon and ham producing machines, rather than part of God’s good creation and therefore deserving of appropriate respect."

Our dinner table topic was, "Who are the pigs?" We had a rather robust discussion as we tried to answer the question, "Who are the pigs?" We came up with some intriguing theories, but we were not too sure if they'd want to be known as pigs, even if they are of the Episcopalian variety. But of course, one has to throw one's pearls somewhere.

Of course, there is something rather familiar about this.
Posted by Unknown at 12:43 PM

From the concise OED:

Thus a steward is responsible to a superior for the management of an estate. The other contemporary term is castellan (m.) or chatelaine (f.).

A pig keeper would have been referred to as a swineherd.

I thought that "the pigs" in the cited reference was intended to refer to humanity and its impact on the earth. It did not dawn on me, as it did on your dinner companions, that the reference might be just the Episcopalian segment of humanity or that Episcopalians are known to be worse keepers of the environment than are other denominations. Was that really what leaped to the forefront when you discusses this?

It seems apparent that man makes a larger negative mark on earth than he should and that God has granted the intelligence, the conscience and the soul to do better with His creation. Why this issue should degenerate into an Episcopalian issue, even among those who are no longer Episcopalians, eludes me.

If the pigs were "intended to refer to humanity," as Scout writes, then who are their keepers?

Schori said, "it’s not pigs who are the problem – they are neat and tidy if they have enough space. The problem is with their keepers."

The illustration of the pigs is her preamble to her comments on the "great Western heresy," which Schori says is "that we can be saved as individuals."

So, who are the pigs?

Again, (perhaps it reveals a simple-mindedness and tendency toward literalism on my part) I thought the reference to pigs meant pigs. We think of the pig as being indifferent to cleanliness, but human (the keepers) activities (including large scale farming) are much more injurious to the environment than are the animals themselves.

I guess the problem with tending to look first to the face value of words is that I sometimes miss the deeper symbolism of an utterance, but I really thought that she was addressing the problem of environmental stewardship. To a relative simpleton, like me, it seems almost reflexively pathological to read into the quote the idea of Episcopalian pigs.

May I suggest that there is a bit of truth in what the Presiding Bishop said about being saved as individuals.

That having been said, each person must on his own accept Christ as Lord and Savior. Hence the idea that we are saved as individuals. But really we are saved in community!

In the very early 1900s, a man named Ellis Parker Butler wrote an amusing short story entitled "Pigs is Pigs". It was not a veiled metaphor for the Episcopal Church (or if it was, I was once again too dim to pick it up), and was, for many years, a staple of the American diet of light, recreational reading. This might be a good moment to suggest its revival.