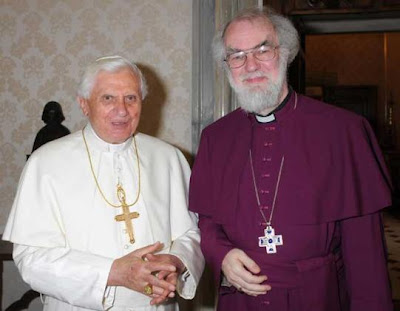 Dr Williams, who yesterday was visiting the Anglican Church in Japan, welcome the news that the pope is set to visit, the first visit in almost 30 years.

"Some time ago, following similar invitations from Roman Catholic bishops and the British Government, I personally expressed my hope to Pope Benedict that he would accept the invitation to visit Britain," he said.

"I am therefore delighted to hear that there is every possibility that the Pope may indeed visit Britain in the course of the next year.

"I'm sure I speak on behalf of Anglicans throughout Britain, in assuring him that he would be received with great warmth and joy."

The Vatican is set to announce the visit, which is likely to be next autumn, in the coming days. Buckingham Palace is expected to agree to the invitation.

The visit would be only the second since Henry VIII broke with Rome and established the Church of England 500 years ago. It will be the first time the Pope has visited Britain since Pope John Paul II in 1982.

Gordon Brown personally asked the Pope to make a visit to Britain when he visited the Vatican in February. It is thought the Pope could hold a Mass at Wembley Stadium, much like John Paul II did almost 30 years ago.

A spokesman for Mr Brown said: "The PM is obviously delighted at the prospect of a visit from Pope Benedict XVI to Britain.

"It would be a moving and momentous occasion for the whole country and he would undoubtedly receive the warmest of welcomes."

David Cameron, the Conservative leader, said he was "delighted" to hear about the possible visit.

Caption for the Picture:

A Leader and a Ditherer

Hope he presents the Pope with the 39 articles.......a fine gift from and ABC