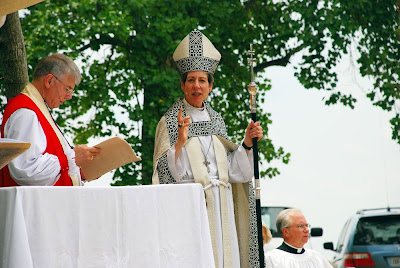 The Presiding Bishop's litigation strategy has been to set up shadow dioceses, financed by the national office, appoint a shadow bishop to sue the departing diocese and depose the clergy that voted to separate from The Episcopal Church. The Diocese of Quincy responds (via e-mail):

The Standing Committee of the Diocese of Quincy, part of the Anglican Province of the Southern Cone, has issued a statement regarding recent actions taken against its clergy by an Episcopal bishop.

“The supposed inhibitions and depositions of our clergy have no bearing on those clergy, or on their ministries, since our diocese is no longer under the authority of the Episcopal Church. The actions of Episcopal Bishop John Buchanan simply mean that the Episcopal Church no longer wants these clergy to be allowed to function in any of their churches,” said Fr. John Spencer, President of the Quincy Standing Committee.

Buchanan, Fr. Spencer said, represents a new Episcopal diocese in central Illinois that was organized last April. In late August, Buchanan sent letters supposedly accepting the “renunciation of the ordained ministry” of the Episcopal church by several Quincy clergy, and declaring that those clergy were deprived of all the authority conveyed in ordination. “We did leave the Episcopal Church,” Spencer said, “but we didn’t renounce our ordination vows, or abandon our ministries.” Those named by Buchanan included The Rev. Edward den Blaauwen, The Rev. John Spencer, The Rev. Richard Chapin, The Rev. Thomas Janikowski, The Rev. Lewis Payne, The Rev James Marshall, and The Rev. Peter Powell.

“What Bishop Buchanan either doesn’t understand, or just doesn’t want to accept,” Fr. Spencer said, “is that the Diocese of Quincy separated itself from the Episcopal Church last November. When we did that, we made it very clear that the rules and canons of the Episcopal Church no longer have any authority or control over our diocese, or our clergy.”

“By contrast,” Spencer added, “once we knew which of our clergy wanted to stay behind in the Episcopal Church, we simply released them from our clergy roster as priests and deacons in good standing. We never questioned their integrity, or their right to continue in ministry. They have not shown us the same courtesy, or respect.”

Additionally, Spencer said, Abbot Morales, Fr. Camacho Castro and Fr. Gonzalez are members of St. Benedict’s Abbey in Bartonville, an ecumenical abbey, and were never under the control of the Episcopal Church.

To add to the confusion, Spencer said, the new Episcopal diocese adopted a similar name, The Diocese of Quincy of the Episcopal Church. “But they didn’t stop there,” Spencer said. “They have put up a website that lists all the churches of our diocese as churches of their diocese. They are intentionally misleading people.” For example, the church Spencer serves, St. Francis in Lake of the Woods Plaza, Dunlap, “has nothing whatever to do with the new Episcopalian diocese. But they list St. Francis as one of their churches. They know this is false.”

At their Synod last November, the historic Diocese of Quincy, founded in 1877, realigned as a member of the Anglican Church of the Southern Cone (South America). At their upcoming Synod in October, they expect to formally affiliate with the Anglican Church in North America, a new jurisdiction of some 700 churches in the U.S. and Canada who have left the Episcopal Church and the Anglican Church of Canada because those groups have fallen away from historic Christian teaching and discipline.

The legitimate website of the original Diocese of Quincy, Spencer says, is “Don’t accept imitations,” he said.

Buchanan did the same thing to the clergy of Church of the Messiah when he was interim in the Diocese of Southern Virginia. He accepted the "renunciation of ordained ministry" from our rectors, even though they never renounced their vows. Dio. of Quincy needs prayer because this man is a .....! Lord have mercy on his heartless soul.

"The Presiding Bishop hath no jurisdiction in the realm of the Diocese of Quincy.." = ]

Good luck to you poor Anglicans. Rome awaits with charity and patience should y'all ever tire of this nonsense.