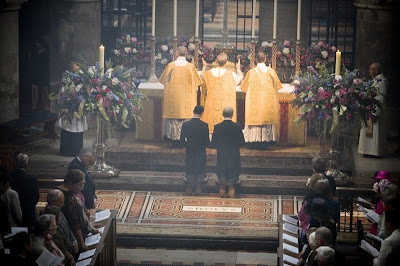 Last June we wrote about the marriage of two ordained men to each other that was performed on May 31 in the Church of England in London.

Ruth Gledhill has an update on the rector of St. Bartholomew the Great in London who performed the wedding. Seems all is fine now. The rector has written an apology to the Bishop of London, saying that he was "inconsistent with the terms of the Pastoral Statement from the House of Bishops issued in 2005." Oh.

He also states that he "regrets" that he "had not appreciated that the event would have been attended by so many nor that it would have attracted the publicity and notoriety which it did."

Of course, that is kinda the point of the whole thing.
Posted by Unknown at 10:27 PM

He should have been defrocked and his pension cancelled and been thrown out of the rectory. No chance for an apology, no trial necessary - the facts were all clear.

As it is: this must be the last straw for Christians in the CoE in the UK. coexistence and tolerance for liberals is now impossible

Time to submit to the Jerusalem declaration and have nothing whatsoever to do with such heretics.

CoE is only a few steps behind.

He also states that he "regrets" that he "had not appreciated that the event would have been attended by so many nor that it would have attracted the publicity and notoriety which it did."

Did VGR write this for the guy???

And then there is the way the Orthodox Church treated such an incident... not only was the priest defrocked.....

MOSCOW -- The Russian Orthodox Church has demolished a chapel where a priest conducted a "marriage" ceremony between two men.

The Chapel of the Vladimir Icon of the Mother of God was torn down apparently after local churchmen decided it had been defiled.

The "marriage" of Denis Gogolyev and Mikhail Morozev in Nizhny Novgorod scandalized the Orthodox Church and created outrage among ordinary Russians.

The priest, the Rev. Vladimir Enert, was defrocked after the men said they paid him a $450 bribe to ignore a ban of same-sex "marriages."

A spokesman for the Orthodox Church said the chapel had to go, as it had been desecrated. ....

Same-sex marriage is is beginning to take hold in the 21st Century.
It is not evil, wicked, depraved or demonic - merely different from what we are accustomed to.
The service was conducted in the historic Church of Bartholomes the Great, founded in 1123.

If you haven't read it, I recommend the essay Un-Eglish and Un-Manly by David Hilliard.