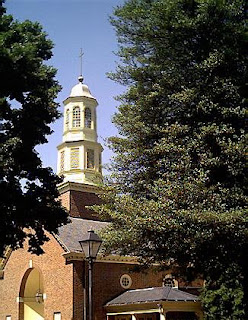 A Fairfax County judge ruled Tuesday that a piece of church property involved in a lawsuit pitting conservatives against liberals in the Episcopal Church belongs to the Truro Church in Fairfax, a leading traditional parish that left the denomination nearly two years ago.

That transaction, which has been contested by the Episcopal Diocese of Virginia, was valid, the judge ruled.

The hearing was the beginning of the last phase of a huge multiproperty lawsuit pitting the Episcopal Church and the Diocese of Virginia against the 11 departing conservative congregations. The final hearings concern a handful of properties that are in dispute between the Episcopal diocese and the Anglican District of Virginia (AD), the newly constituted organization for the caretakers.

"We are certainly pleased with the ruling," said Jim Oaks, AD vice chairman. "It was the intent of the donors of the property to deed the property and the assets back to Truro Church. The judge agreed with that in his ruling today."

The AD churches pulled out of the Episcopal Church because of differences in biblical interpretation and the 2003 consecration of the openly gay New Hampshire Bishop V. Gene Robinson.

The diocese and the Episcopal Church earlier hinted they would contest the elections by which the churches left the denomination. But after a series of hearings involving the two sides, Judge Bellows signed a Sept. 26 order saying the AD churches had proved to him all the votes were legally valid.

The ruling greatly lowered the scope of this week's trial.

To date, Judge Bellows has dealt three consecutive defeats to the diocese and the denomination in their bid to retain millions of dollars of property held by the nine churches. A Civil War era statute unique to Virginia known as the "division statute" - which allows a departing congregation to hold onto its property - has been key to the AD's victories. The most dramatic testimony may be given Thursday, when the diocese will argue that the Falls Church, a 276-year-old congregation attended by George Washington shortly before he became president, belongs to the Christ Episcopal Church in Alexandria.

The diocese has unearthed two 19th-century land deeds stating the Falls Church's 5.5 acres belonged at the time to a "Truro parish," which encompassed several Colonial congregations in Northern Virginia. Christ Church, the diocese said, is the successor to Truro parish, citing two U.S. Supreme Court decisions in 1815 and 1824.

The vestry of Christ Church on Sept. 24 voted - although with some dissent - to allow the diocese to represent the church. Christ Church, said Russ Candle, a Patron Bogs attorney representing the congregation, wanted to "carry out its fiduciary obligations" regarding "property about on we are informed that we are the successor to the grantee."

Steffen Johnson, attorney to the AD, said Christ Church has no claim over the Falls Church.

"We find it remarkable this supposed claim would go unnoticed for 185 years," he said. "You will search land records in vain to prove Christ Church has ever held title or exercised dominion over the Falls Church property."

I see you corrected the typo on Mr. Johnson's name. Another is that it should be "Patton Boggs," not "Patron Bogs."

Q: How many sub-decisions can one church property case be broken down into?

May our faithful God now bless you in your mission and make Truro a beacon in Virginia and the US.