The Washington Post: Longtime Bishop Who Presided Over Va. Rift to Step Down 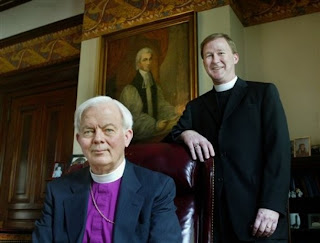 The Rt. Rev. Peter James Lee, who has been bishop of the Episcopal Diocese of Virginia for 24 years, announced yesterday that he will step down Oct. 1 to make way for a successor who was named in 2007.

The diocese, which covers northern and eastern Virginia and includes 80,000 members, is one of the largest in the Episcopal Church, the U.S.-based branch of the global Anglican Communion.

Starting this fall the diocese will be overseen by the Rt. Rev. Shannon Johnston, 50, an Alabama native who has worked in dioceses in the South and is known for his work in prison, music and HIV/AIDS ministries.

Under the laws of the Episcopal Church, a bishop must retire either by age 72 or no more than three years after a successor is consecrated.

"I think the church is more focused beyond ourselves as Americans than when I first came," Lee said yesterday at the diocese's annual council meeting, where he announced he would be stepping down.

Johnston will inherit one of the largest and costliest legal disputes in the history of the Episcopal Church, a land fight with a cluster of Virginia congregations whose members voted to leave the national church over what they see as its liberal distortions of Scripture -- and sought to keep their church properties, worth tens of millions of dollars. The breakaway conservative movement recently won a decision in district court, but the diocese and the national church are appealing.

Lee, 70, said yesterday that the churches' departure was "a major disappointment of my time in office," but he added that in hindsight he feels he could not have kept everyone together.

Lee said he would like to return to working in a church, probably outside of Virginia, and expects to eventually retire to Chapel Hill, N.C.