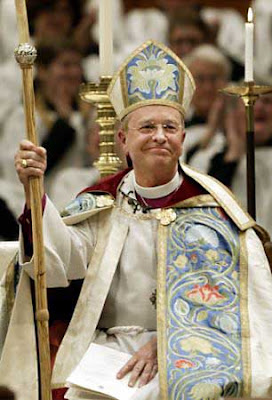 Gene writes to the gang at Episcopal Cafe with the happy news. This comes after Rick Warren offered support to the embattled Anglican congregations in California who are in danger of losing their properties after Bishop Bruno of the Episcopal Diocese of Los Angeles sued them after they voted to separate from The Episcopal Church. Looks like Obama has jumped into the fray now as well, picking the Bishop of New Hampshire - who is not recognized by the Archbishop of Canterbury - to do this political event in Washington D.C. Popcorn anyone?

INAUGURAL PRAYER: Bishop V. Gene Robinson of New Hampshire is scheduled to deliver a prayer at a Jan. 18 inaugural event for President-elect Barack Obama. Bishop Robinson told the Associated Press "I will be careful not to be especially Christian in my prayer."

Wonder how this publicity going to help The Episcopal Church in its troubles (sort of does cement the new political image, doesn't it?) - especially as it is now seen as opposing Rick Warren (personal friend of Bono that he still is) and his work. Just how are those MDG really doing anyway? So now we have Rick Warren on one side of The Mall and Gene Robinson clear down there on the other side. Gotta wonder about that. Pass the popcorn.

LATER: Can it get any worse? AP is reporting that "Robinson said he doesn't yet know what he'll say, but he knows he won't use a Bible." What is this, a parody?
Posted by Unknown at 9:03 AM

BB, Are you joking? Is this April Fools' Day already?

I pray that Rick Warren will have the courage to pray that the new president will find the will to protect the innocent unborn from slaughter. Hey! He's already offended everyone who wants to be offended, why not go for broke?

So it is legit, VGR on Sunday, Warren on Tues.

If at first you don't succeed, whine, whine again...

Just because Gene did not go blabbing about the honor does not mean he did not know about it long before the Warren stuff came out.

Was Gene actually invited by Obama or did TEC/Integrity cook up this ‘inaugural event’ for their own purposes?

I will be careful not to be especially Christian in my prayer.

Ummm ... that should be kinda easy. He's been practicing not being especially Christian for years now.

Pass the tums and the imodium. There are days that this should not be the Post Modern period but the Science Fiction period.
Lord have mercy.
BTW, the Concord Monitor calls him Gene "one of our nations (not capital in their sentence) most prominent religious leaders"
Forget Tums, send Phenergan

If you're looking for something else to do that day:

Blessing the Waters of the Potomac Sunday January 18th at 2:30 PM at the Tidal Basin. Sponsored by the Orthodox Christian Clergy Council of Metropolitan Washington DC.

This is when the Orthodox priests bless the water - you often see photos in the paper of Russians or Greeks jumping into the water....
Should be better than listening to VGR, I'd think.

This service is VERY Christian, with scripture readings that contain water from seperating the waters in Genesis, to the Red Sea parting, to the Jordan parting, to Naaman being healed in the Jordan, to Jesus's baptism. It's amazing to see the numerous references and how they are related.

As a new member of the Orthodox Church and escapee from the Episcopal Church, I appreciate that Anam Cara.

Hening, are you in the DC area? Chance I might see you there?

Saying that he "caved" assumes this is a reactionary move and not the original decision. Don't forget what happens when the tail wags the dog!

That's a good point, Joe. There has been some interesting articles about the timing of the announcement - as well as when the final decision was actually made. Very interesting indeed!

Bishop John will be installing the Rector at Church of the Advent that day (ooooohh, Chane would be happy about that).

After the blessing of the water you all can head up to Columbia Heights to hear some great preaching and celebrate with them or join me at my last Sunday at Rez in Eastern Market before we're planting another parish.

So will he be wearing his flak jacket I wonder?

I am in the People's Republic of Massachusetts. My family and I belong to a Western Rite parish of the Antiochian Orthodox Church.

Have a blessed day at the water.