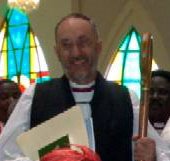 Abuja, August 20, 2006, Archbishop Nicholas Okoh of the Anglican Ecclesiastical Province of Bendel today in Abuja called on Christians the world over to defend the faith against the onslaught arising from heretic teachings and practices.

He made the charge at the consecration of four new bishops by the Primate of Church of Nigeria (Anglican Communion) at the National Christian centre Abuja.

Making reference to the book of Jude, Archbishop Okoh said that today, the church was being threatened by those who profess heresy as a doctrine. He said this was the same situation, which led to Saint Jude’s call on Christians of old to stand fast and defend the doctrine.

He reiterated the same call to Christians in today’s world, especially the newly consecrated bishops, asking them to defend the faith handed over to “us by our Christian forefathers and be the Jude of today, wherever you find yourselves.’’ He reminded them that the love of money was the root of all evils and asked them to seek the common good, be humble in correcting their flocks and to tend them with love.

The Archbishop made the distinction between the right beliefs and right practice, stressing the new bishops would in the course of their ministry find various groups of persons with conflicting doctrines. He urged them not to be swayed but to defend their faith and gently correct those who go astray with love.

He said there were various categories of heresy- induced doctrines. He cited those who believed in constantly sinning because they believed the grace of God was abundant and that God would always forgive them. Some others do not believe in God at all while still another set of people do not believe in the existence of angels.

He quoted copiously from the bible to support the Anglican church’s stand that there was one and only one loving, righteous, holy, and true God and that He demanded purity in Christian living.

Archbishop Okoh asked politicians, who had tasted power and wanted to remain in power, those who want to taste power as well as “those in the corridors of power, who want to move on into the sitting rooms of power” to learn to acknowledge God in their lives.

“Except a man acknowledges God, is taught by God and is spirit filled, he cannot rule well.’’

He asked all Christians to reflect the teachings of Christ in their personal lives and to support the nation with their prayers so that God will be a part of next year’s election.

He reminded everyone that “ALL POWERS BELONG TO GOD”, who gives whomever he wishes to give and admonished politicians interested in Nigeria’s coming election; “no matter what you do, if God does not want you to rule, you will not!’’

After the sermon, came the consecration proper. This segment of the event started with a procession of the bishops-elect, who were each led in by two presenting bishops.

They came in with their hands held high, supported by their presenters who then presented them to the primate. After the presentation, they proceeded to take the oaths before the legal team led by the Registrar of the Church.

Thereafter, they were examined by the dean of the Church before the litany was sung with the bishops-elect lying flat on their faces in total surrender to God after reaffirming their allegiance to the Lord Jesus Christ as the primate invited the congregation to pray that the Holy Spirit descend on them afresh.

All the serving bishops present, including Nigeria’s nine serving archbishops (tenth retired in June) joined the primate in laying hands on the new bishops as the consecration prayers were led by Archbishop Akinola.

After praying, the primate presented each of them with a staff of office and a bible.

He charged them to make the bible their guide, saying “here are the words of eternal life.” Presenting the staff, he admonished; “Be a shepherd, not a wolf, seek the lost, uphold the weak,……. lift the downtrodden. Ensure discipline but forget not mercy…... May the spirit of the chief shepherd guide you!’’

The 8,000 capacity worship centre loudly applauded the newly consecrated Bishops Christian Ide, Musa Tula, Adebayo Akinde and Martyn Minns as they were presented to the Church along with their wives.

(Church of Nigeria News)
Posted by Unknown at 10:13 PM