“They couldn’t have done the math” 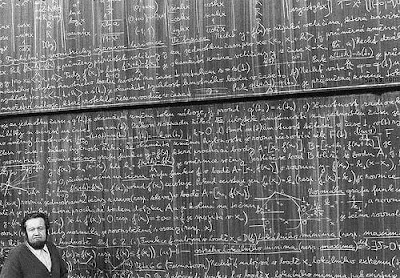 Calvin Trillin explains it, from the The New York Times:

“IF you really want to know why the financial system nearly collapsed in the fall of 2008, I can tell you in one simple sentence.”

The statement came from a man sitting three or four stools away from me in a sparsely populated Midtown bar, where I was waiting for a friend. “But I have to buy you a drink to hear it?” I asked.

He did indeed look capable of buying his own drinks — one of which, a dry martini, straight up, was on the bar in front of him. He was a well-preserved, gray-haired man of about retirement age, dressed in the same sort of clothes he must have worn on some Ivy League campus in the late ’50s or early ’60s — a tweed jacket, gray pants, a blue button-down shirt and a club tie that, seen from a distance, seemed adorned with tiny brussels sprouts.

“The financial system nearly collapsed,” he said, “because smart guys had started working on Wall Street.” He took a sip of his martini, and stared straight at the row of bottles behind the bar, as if the conversation was now over.

“But weren’t there smart guys on Wall Street in the first place?” I asked.

He looked at me the way a mathematics teacher might look at a child who, despite heroic efforts by the teacher, seemed incapable of learning the most rudimentary principles of long division. “You are either a lot younger than you look or you don’t have much of a memory,” he said. “One of the speakers at my 25th reunion said that, according to a survey he had done of those attending, income was now precisely in inverse proportion to academic standing in the class, and that was partly because everyone in the lower third of the class had become a Wall Street millionaire.”

I reflected on my own college class, of roughly the same era. The top student had been appointed a federal appeals court judge — earning, by Wall Street standards, tip money. A lot of the people with similarly impressive academic records became professors. I could picture the future titans of Wall Street dozing in the back rows of some gut course like Geology 101, popularly known as Rocks for Jocks.

“That actually sounds more or less accurate,” I said.

“Of course it’s accurate,” he said. “Don’t get me wrong: the guys from the lower third of the class who went to Wall Street had a lot of nice qualities. Most of them were pleasant enough. They made a good impression. And now we realize that by the standards that came later, they weren’t really greedy. They just wanted a nice house in Greenwich and maybe a sailboat. A lot of them were from families that had always been on Wall Street, so they were accustomed to nice houses in Greenwich. They didn’t feel the need to leverage the entire business so they could make the sort of money that easily supports the second oceangoing yacht.”

“I told you what happened. Smart guys started going to Wall Street.”

“I thought you’d never ask,” he said, making a practiced gesture with his eyebrows that caused the bartender to get started mixing another martini.

“Two things happened. One is that the amount of money that could be made on Wall Street with hedge fund and private equity operations became just mind-blowing. At the same time, college was getting so expensive that people from reasonably prosperous families were graduating with huge debts. So even the smart guys went to Wall Street, maybe telling themselves that in a few years they’d have so much money they could then become professors or legal-services lawyers or whatever they’d wanted to be in the first place. That’s when you started reading stories about the percentage of the graduating class of Harvard College who planned to go into the financial industry or go to business school so they could then go into the financial industry. That’s when you started reading about these geniuses from M.I.T. and Caltech who instead of going to graduate school in physics went to Wall Street to calculate arbitrage odds.”

“But you still haven’t told me how that brought on the financial crisis.”

“Did you ever hear the word ‘derivatives’?” he said. “Do you think our guys could have invented, say, credit default swaps? Give me a break! They couldn’t have done the math.”

“Why do I get the feeling that there’s one more step in this scenario?” I said.

“Because there is,” he said. “When the smart guys started this business of securitizing things that didn’t even exist in the first place, who was running the firms they worked for? Our guys! The lower third of the class! Guys who didn’t have the foggiest notion of what a credit default swap was. All our guys knew was that they were getting disgustingly rich, and they had gotten to like that. All of that easy money had eaten away at their sense of enoughness.”

“So having smart guys there almost caused Wall Street to collapse.”

My Dad e-mailed this to me yesterday - makes sense in a funny sort of a way. I liked the term "enoughness"

There is a lot of "depression era" logic to what was said.

At the end of a PBS show on the crash of 1929, someone pontificated that there is crash, either small or great, every twenty to thirty years, that is about as long as it takes for people to forget the last one.

Trillin is a great writer, and you've done us all a service to make this example of his work a bit more accessible.