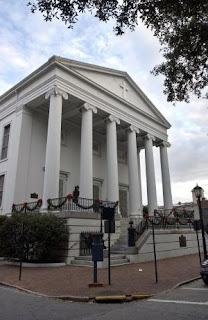 (Savannah, GA) Christ Church, the oldest church in Georgia, has appealed the ruling of Judge Michael Karpf , which granted control of the congregation’s property to the Episcopal Diocese of Georgia.

“This is another step in what we knew would be a long process,” stated the Rev. Marcus B. Robertson, Rector of Christ Church. In order to maintain its fidelity to the historic Christian faith, Christ Church withdrew from the Episcopal Church on September 30th, 2007. “This decision, though set in the context of a legal contest, remains consistent with the commitment we made before God and one another at that time,” Robertson added.

Neil Creasy, Chancellor of Christ Church, said, “The Supreme Court of South Carolina is the only state supreme court to have ruled in a case involving facts, law and issues similar to ours. It ruled in favor of the local congregation. We are confident of a similar result here.”

Numerous messages of support have been given to the parish. “We are grateful for the prayers and words of encouragement we have received from churches and individuals from around the world,” said Sr. Warden Carol Rogers Smith.

Christ Church is a member of the Anglican Church of North America (ACNA) and a congregation in the Gulf Atlantic Diocese, which came into being in August as a diocese of ACNA, covering north Florida and south Georgia.

Loser case. Better to spend your money on a lease, movers, and other necessities. Georgia precedent is very much against Christ Church.

When John Wesley (former Christ Church rector) was iced out of his dead father's parish in England Wesley vacated that revered, memoried building and went outside, stood on his father's tombstone and preached to a larger crowd than ever went into the building.

Let the libs fill the TEC Church building...let the thriving Christ Church preach from atop of their tombstone.