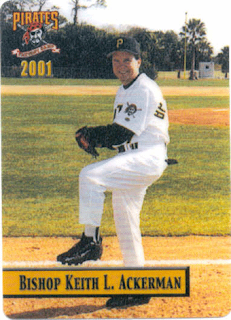 Apparently, Bishop Schori has not received the memo that The Episcopal Church is supposed to be in communion with the rest of the Anglican Communion, thereby sharing its bishops. That's the point of "being in communion," isn't it?

But apparently, this is no longer the case as she is now writing renunciation letters for Episcopal bishops who have not actually renunciated their Episcopal ministry. No one has gone to Rome. No one has teetered off the edge and is worshiping vacuum cleaners on Thursdays when the sun goes down. It's absurd and illustrated yet again that either she is just totally clueless - and it's possible, she didn't exactly wow anyone at her first General Convention as Presiding Bishop, in fact she spent much of the time trying to re-explain things she said that caused even the Bishop of Durham to pop his cork. So either she's clueless or the Litigators are running The Episcopal Church (certainly TEC smashed their evangelism budget, throwing even Father Jake of all people out to the curb).

I'll tell you one thing about Bishop Ackerman - I recall seeing him with Rowan Williams during the Lambeth Conference. They were standing outside the gates leading to the Big Top and Bishop Ackerman was telling Rowan Williams a story that just made the Archbishop of Canterbury laugh and laugh. I find highly it unlikely that Bishop Schori has ever made the Archbishop of Canterbury laugh.

And this is certainly no laughing matter. From here. 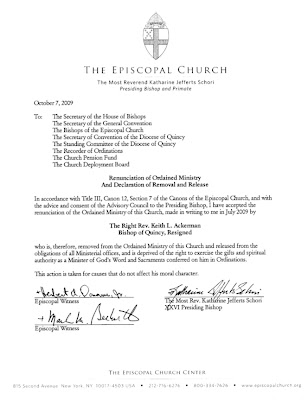 For shame, Bishop Schori. Bishop Ackerman? Mr. Baseball? Who served God and the people of the Episcopal Church when you were still trying to figure squibs out? And we wonder why thousands upon thousands have left The Episcopal Church in my lifetime. It's just plain sad. What a sad and sorry witness to the world.

And it's such a waste - it's purely for litigation purposes, that's what this document is all about - litigation. Bishop Ackerman is still in communion with the Archbishop of Canterbury, after all, he's retired so he still has his pension - this is just plain litigious spite and it isn't lost on anyone.

Tip of the Tinfoil to GG.

So, we send this dedication out to Bishop Keith Ackerman:


UPDATE: Over at SF, the Dean of Nashotah House, The Very Rev'd Robert Munday, who actually trains people for ordination instead of defrocking them, clarifies how once again the Presiding Bishop is taking on powers she does not have and makes assertions that are untrue:

I know from speaking with Bishop Ackerman that he sent the Presiding Bishop a handwritten letter merely asking to have his credentials transferred to the Diocese of Bolivia. He said that he had no intention of renouncing his orders and that, while he intends to assist Bishop Lyons in work in Bolivia, he also wished to remain available to assist bishops in the United States, as requested.

The Presiding Bishop says that “...there is no provision for transferring a bishop to another province.” But that is not true. Title III, Canon 10, Sec. 2, provides for the reception of “Clergy Ordained by Bishops of Churches in Communion with This Church” by means of Letters Dimissory and states:

(3) The provisions of this Section 1 shall be fully applicable to all Members of the Clergy (emphasis mine) ordained in any Church in the process of entering the historic episcopal succession with which The Episcopal Church is in full communion as specified in Canon I.20, subject to the covenant of the two Churches as adopted by the General Convention.

And a subsection states that the churches from which such a clergy may be received includes:

(i) those duly constituted Dioceses, Provinces, and regional Churches in communion with the See of Canterbury,

And, of course, the Episcopal Church has transferred clergy to other provinces of the Anglican Communion throughout its history. If one reviews the clergy list in The Episcopal Church Annual in most years one will find a section listing “Clergy Transferred to Other Churches” with the country or province to which the clergy have transferred given in parentheses. For instance, if you look in the 2003 Annual you find the name of the late Peter Toon followed by (England), because the Rev. Dr. Peter Toon, who continued to live and minister in the United States until his death earlier this year, transferred his canonical residence back to England in 2002.

Further, it is not even necessary for the Presiding Bishop to be involved in transferring a bishop to another province or diocese elsewhere in the Anglican Communion.

CANON III.10.2(a)(2) provides only that Letters Dimissory be issued by “the hand and seal of the Bishop with whose Diocese the person has been last connected.”

That a resigned bishop (such as Bishop Ackerman) may transfer to another diocese is indicated in CANON III.12.8(i) which states:

This Canon demonstrates that Bishops are considered to have canonical residence in a diocese and that this canonical residence can be transferred by means of Letters Dimissory. Consequently, the “Ecclesiastical Authority of the Diocese in which the resigned Bishop has had canonical residence most recently” (presumably the “Provisional Bishop” of Quincy) could have transferred Bishop Ackerman to Bishop Lyons in Bolivia by means of Letters Dimissory and his transfer have been recorded without any recourse to the Presiding Bishop or the purported “renunciation” which the PB is now asserting.

It will be remembered that the Presiding Bishop also erroneously asserted that Bishop Henry Scriven renounced his orders when he returned to England. (See 1, 2, and 3.) If the Presiding Bishop would only have bothered to check for precedents in how such tranfers were handled, she could have avoided the scandal of, once again, misinterpreting the canons.

Your tribute to Bishop Ackerman--the only bishop with his own baseball card--is perfect!

So it appears that TEC has made a serious statement here about how it feels about world missions. This is very disappointing!