The Living Church: Rowan Williams says only provinces may sign the Anglican Covenant 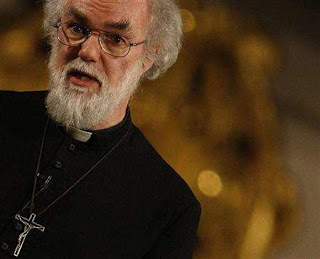 The Living Church is reporting that the Archbishop of Canterbury has written the Bishop of Central Florida, John W. Howe, telling him that only provinces may sign the Anglican Covenant.

In an earlier letter we recall that Rowan Williams told the same bishop that he is in communion on the diocesan level with bishops, rather than by province (hence, he could invite all the diocesan bishops but the Bishop of New Hampshire to the Lambeth Conference last year). This is in direct conflict from what he wrote to Bishop Howe in October 2007 when Dr. Williams wrote:

The organ of union with the wider Church is the Bishop and the Diocese rather than the Provincial structure as such.

In addition, back in 2007, Dr. Williams wrote "that any Diocese compliant with Windsor remains clearly in communion with Canterbury and the mainstream of the Communion, whatever may be the longer-term result for others in The Episcopal Church."

Now he is apparently clarifying that while he may be in communion with diocesan bishops, the "organ of union with the wider church" is now found in the Anglican Covenant and this is the responsibility of the Province, not the Diocese. Rowan Williams makes it clear in his Sept. 2009 letter that “as a matter of constitutional fact, the [Anglican Consultative Council] can only offer the covenant for ‘adoption’ to its own constituent bodies (the provinces).” 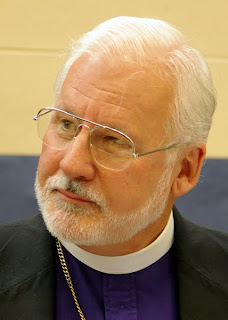 Though he had written Bishop Howe the year before, this view on the provinces being the only authorized entity to sign the Anglican Covenant has actually been clear for over a year when the Anglican Communion and Lambeth Palace leadership specifically said that the Covenant would be presented to the provinces for adoption, not dioceses. It was quite clear then, at least to the press, that it was provinces who would accept or reject the Covenant.

This understanding - that it is provinces and not dioceses who are authorized to sign, or not sign, the Anglican Covenant - has led the way, in fact, for the establishment of the Anglican Church in North America as it becomes even more apparent by recent actions (and non-actions) by the General Convention of The Episcopal Church that it is only remotely possible for TEC to sign off on the Anglican Covenant.

This does put the orthodox dioceses in a quandary. Do they remain inside The Episcopal Church and continue the fight to return the province to orthodoxy so that it can in good conscience sign the Anglican Covenant, or do they also realign with ACNA which is eager to sign the Anglican Covenant? Or will the dioceses continue to bleed congregations, as now seems likely in the Diocese of South Carolina?

George Conger, who is based in the Diocese of Central Florida, writes for The Living Church:

In a Sept. 28 letter to the Rt. Rev. John W. Howe, Bishop of Central Florida, Archbishop Williams called the diocesan bodies' endorsement a step in the right direction. However, he stated, “as a matter of constitutional fact, the [Anglican Consultative Council] can only offer the covenant for ‘adoption’ to its own constituent bodies (the provinces).”
The archbishop added that “I see no objection to a diocese resolving less formally on an ‘endorsement’ of the covenant.” Such an action would not have an “institutional effect” but “would be a clear declaration of intent to live within the agreed terms of the Communion’s life and so would undoubtedly positively affect a diocese’s pastoral and sacramental relations” with the wider communion, he said.

+Howe has been very clear that he will not take the diocese out of TEC. Much has been made about the prior comments by the +ABC that the dioceses are what constitutes the Communion. So for this new statement of the ABC that Provinces sign on and not the diocese - well, everyone now has a clear answer.

The ABC has been consistent in his dithering. We're proud of +Howe for taking the +ABC at the +ABC's "word". Unfortuantely for +Howe, we all know what that was worth. +Howe must feel betrayed. We do.

The part that will bother me the most is when, not if but when, TEC signs the covenant and then proceeds to "live into" their peculiar interpretations of the words of the covenant countless meetings will be held and nothing will be done. Meanwhile, many who would desire to live the letter and spirit of the covenant will be shut out.

The solution for orthodox dioceses will not be found in TEC where duplicity is the norm.

The Covenant will only be as effective as any enforcement mechanism enacted. Otherwise, TEC can sign it with impunity.

That's an interesting comment, Fr. Daniel. In Virginia, the polity has been that the Diocese was the "church" and was made up of "parishes." Some of the parishes had more than one "congregation." This is why the canons of TEC, even as they were interpreted by Bishop Schori's chancellor, was that these "churches" were in communion with one another in General Convention.

There really is no CONSTITUTIONAL national Episcopal Churches. It is made up of "churches" (i.e, dioceses) in communion with one another in General Convention.

Oddly, it is indeed this "nationalization" of churches that I find troubling, whether it is from TEC or the Archbishop of Canterbury. I still believe in the historic polity of Virginia which I believe is what led Virginia to become the largest diocese in the Episcopal Church.

PS Even though I am obviously aligned with a church that is in ACNA, I actually personally agree with Bishop Howe's understanding (and the ACI's understanding) of the actual constitutional polity of The Episcopal Church.

The fact remains, however, that Rowan Williams - catholic that he is - holds a different view. The current regime at 815 also holds that view, as does, somewhat ironically, ACNA. I am not so comfortable with all this nationalization and centralization. I don't think those efforts are at all helpful in growing the church or carrying out effective evangelism to the unchurched.

I talk on the phone with Bob Duncan's office and it's "His Grace" this and "His Grace" that and I want to scream and run out of the room.

True or false: the majority of churches who aligned with ACNA has shrunk since they left the Episcopal Church. I've had a close friend from that side of things say so.

And you don't have comments regarding the new bishop of Virginia? There are videos - I'd want to hear your commentary.

I don't know about others, but my parish has increased in size since last year.

PS - I am still reserving judgement on the new Bishop of Virginia. I have some opinions, but let's just see what happens over the next month.

Whether TEC signs or not the GS will never be in communion with it.

Here's a report that says the churches are growing since escaping the organization that the pansexuals and syncretists have hijacked to foment their agendas:

"Since its formation more than two years ago, the Anglican District of Virginia has grown to 31 congregations that left the Episcopal Church USA because of that denomination's liberal leanings.

Bishop David Bena says the growth of the ADV shows there are many Anglicans who want to follow God's Word instead of following changing cultural trends.

"We have about 9,000 people in the pews on a given Sunday, [but] what's being said is probably more important than numbers," he shares. "I see a real revival of Christianity going on across the continent, and it's having an effect in the Anglican realm as well."

Bena says evangelism will be emphasized during the synod. "We have inherited a wonderful way of sharing the gospel in word and deed, sometimes from a little more intellectual level," he says. "Our commission from God is to bring people into a dynamic relationship with Jesus Christ, and then to disciple them so that they can make new disciples."

After the departure of those who chose to remain with TEC/DioVA, my church is also showing growth.

Having talked only briefly with +Duncan in person, I suspect that he is not the one wanting to be referred to as "his grace".

Perhaps the folks in Ambridge are just a little in awe of being placed in the spotlight.

RalphM, I agree with your assessment of ++Duncan. I know a few of the folk helping to set up the ACNA province offices here, and bb's experience does not sound like any of them, nor would it be typical of the long term Bridgers. I'm looking at the formal invitation to the rector installation/sanctuary dedication with the Most Reverend presiding at Church of the Savior here, and there's not a single 'grace' on it.

Maybe they have front office help from some younger Trinity students that are a bit overawed.

"His/Your Grace" is the formal British form of address for Dukes & Archbishops, BB. Its use is confined to "servants and tradesmen", other than in exceedingly formal written or face-to-face communication. The individual in question would be addressed or referred to by those not in the servant/tradesman categories as "Archbishop" or "Duke".

Which face does one believe? The one back then or the one that has been smacked by Schori now?

Get my lifejacket. It's time to swim the Tiber!

Your church has grown since last year? How about since your church "discerned" its way out of the Episcopal Church?

By Grace we are saved...or so I have been led to believe.

Actually, LapinBizarre gave us the answer. The ACNA offices have brought in hirelings from the British "servants and tradesmen" class to answer the phones. They have replaced Grace, who now says the prayer before meals.

On TitusOneNine, the commenter Seitz has a very good, and fairly soothing, explanation of the Archbishop's position. One has to read through the thread to pull the bits together. But I would think that anyone reading it and agreeing that Seitz has it right would find his interpretation to be one that reflects positively on what Cantaur has said in this context.

RETRACTION: Today I heard one of his priests call ++Duncan "Your Grace" four times in the space of twenty minutes.