Litigation continues its grip: The new bishop of the Episcopal Diocese of Virginia writes the diocese as they head back to court 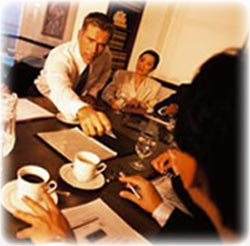 Since the language has not changed with the departure of Bishop Lee (and this language never sounded like him anyway), it's clear that the lawyers have a firm grip on the Diocese of Virginia.

Bishop Johnston now writes the diocese, continuing the same rhetoric that came into the diocese to erraticate (er, eradicate) the former Bishop of Virginia's Protocol for Departing Congregations (which by the way, is still on the diocese's server, at this writing). Bishop Johnston's rhetoric is so alien to how we've understood the role of congregations in the Diocese of Virginia, one wonders what local parishes that remain in the Diocese are thinking. Certainly the bishop is not completely clued in, but listening to the 815 lawyers - who seem to have very little understanding about the historic polity of Virginia (Bishop Moore and Bishop Meade anyone?). One does hope he'll be able to think for himself, but when someone as strong as Bishop Lee buckles under pressure from 815 - why would the new bishop be able to bring the diocese back to the negotiating table?

Let us recall that it was the Bishop of Virginia who abandoned his own negotiating table within days of calling the departing congregations to send representatives to the table in 2007 - his own negotiating table! We did not leave the table - he did, and it's apparent that Bishop Johnston hasn't been told that (or has he?). One does hope he has an opportunity to read the Standstill Agreement soon. One also hopes he has an opportunity to talk to the departing rectors directly and personally. I in fact pray for that.

We can see here the erroneous argument about freedom - last time I checked we had a freedom to vote, especially in Virginia where Anglicans voted long ago to not remain in the newly Disestablished Church but separate to form their own congregations. The Diocese of Virginia was built on the freedom of the people to choose, freely choose its associations and the associations of its congregations. In Virginia we also believe that those who own property have their names on their deeds. One hopes Bishop Johnston, being new to the Commonwealth, has the opportunity to learn Virginia history.

Bishop Johnson quotes the lawyers' strategy in his letter:

freedom is under direct attack here in our diocese in the form of a Virginia law that allows the government to interfere with the faith, polity and structure of our Church and other hierarchical churches in the Commonwealth.

Let's just remember what happened. The Bishop of Virginia instituted a Commission on Reconciliation out of the Diocese of Virginia's Annual Council in 2005. That Commission found that the Diocese was at a Level Five Conflict, the worst possible. From the Commission on Reconciliation's report, the Bishop of Virginia created a Special Committee of his own choosing to find a way forward, with six members led by his own Chancellor. This Special Committee met for a year in close consultation with the Bishop of Virginia and the chairman, his own chancellor, wrote the Protocol for Departing Congregations as a way to recognize that the conflict was so severe it was toxic and in danger of causing congregations to collapse and to enable a process for the congregations to remain in as a close a communion possible. The protocol included a system of voting by the members of the congregations under the canons of the Diocese and the laws of the Commonwealth of Virginia.

Have we made that clear?

The congregations went through 40 days of discernment which included hearing personally from the Bishop of Virginia and presentations from from the Standing Committee on Sunday mornings when the congregations gathered.

The congregations then conducted a legal vote (the Diocese has never contested that the votes were conducted legally and in good order) and filed their votes in their local court house according to the laws of the Commonwealth of Virginia. A Standstill Agreement (which is still not on the Diocese of Virginia's server, even though it is a paramount legal document) then was commissioned between all parties and the Bishop of Virginia to prepare for negotiations over the property. The local congregations refrained from taking legal steps on their property in anticipation to the negotiations that were about to be underway in Bishop Lee's own Property Committee.

Each congregation's vestry was requested by Bishop Lee to appoint two members to his Property Committee and this was all ready completed by some congregations when David Booth Beers, the lawyer to the new Presiding Bishop, came into the Diocese in 2007 and two days later Bishop Lee called everything off, cancelled renewal of the Standstill Agreement, began deposition procedures against all the clergy who voted to separate, instituted personal lawsuits against nearly 200 lay volunteers, and invited the new Presiding Bishop to also personally sue the same 200 lay volunteers and institute their own lawsuits against the voting congregations.

A panel of the Virginia Supreme Court will hear our petition for appeal on October 21 and, while it is unfortunate that these legal proceedings were necessary, I trust that this hearing will bring us one step closer to resolution.

I am proud that the Diocese of Virginia and the Episcopal Church have chosen the path consistently to defend loyal Episcopalians, and to safeguard and to protect the Church's legacy and the Church from unwarranted governmental and legislative interference. It is with the same determination to stand by the people, traditions and legacy of our diocese that I look toward our appeal.

For nearly 225 years, the Episcopal Church has had the freedom to govern itself according to its beliefs. But that freedom is under direct attack here in our diocese in the form of a Virginia law that allows the government to interfere with the faith, polity and structure of our Church and other hierarchical churches in the Commonwealth.

I believe that this law is unconstitutional and that there is too much at stake to let it remain in effect. The legal struggle to secure our right to organize as we choose and safeguard our churches from those seeking to seize them has not been easy. This journey has been a long one, but now more than ever we must all gather around those who need us most at this difficult time.

Loyal Episcopalians have been exiled from their Episcopal homes for too long and I ask you to keep all of them in your prayers. This includes St. Stephen's, Heathsville; St. Margaret's, Woodbridge; Epiphany, Oak Hill; and The Falls Church, Falls Church. These parishioners have been denied the ability to worship as they wish at the very same churches where they were married, where they baptized their children and where they buried their loved ones. I view this next hearing with great hope for the day when I will join these faith-filled Episcopalians as they return to their church homes to celebrate and worship together.

BB NOTE: The phrase used by Bishop Johnston, "unwarranted governmental and legislative interference" is another way of saying that the Episcopal Church believes itself to be above the law. Think about it.

Tip of the Tinfoil to The Intrepid.
Posted by Unknown at 1:13 PM

A new word bb, "erraticate", but very accurate in describing the direction of DioVA...

BB,
The people who read your webcite know the history and the context, the persons remaining in TEC do not.
Is there some way to get the real story to a broader audience? Maybe even the Times Dispatch in Richmond?

Anon #1, I didn't mean to invent another word (erraticate instead of eradicate), but it does seem to describe the process so have left it in.

Ahh, and here I thought it a witty reference to the Daleks.

But actually that would be "exterminate".

I hope they win. He's being faithful.

Anon #1, I didn't mean to invent another word (erraticate instead of eradicate), but it does seem to describe the process so have left it in.

As you note, bb, The Lawyer's Church continues to increase its dominance over diocesan life, enforcing its plain vanilla "Sue 'em!" approach--or is that plain neapolitan?

One can only hope that DioSC will be the exception.

"...the Episcopal Church believes itself to be above the law."

Isn't it really that TEC feels the law that it is under is a higher one than the local Virginia statutes? namely, the Constitution....I am sure TEC does not consider itself outside outside of all law and feel the above quoted statement is inflammatory and wrong on the bare face of it.

Please tell me that Bishop Johnston's comments didn't surprise anybody.

If he thinks that his influence and tired rhetoric is going to change the law of Virginia then he needn't waste his breath. More capable people than him are determining what is constitutional.

His concern should be why his kind of theology and pastoral leadership create crises to start with.

Would you like some cheese to go with your baloney, bb?

"I can only speculate that the Bishop of Virginia and the Standing Committee never dreamed that thousands of the membership in the Diocese of Virginia would vote their conscience to separate. I do think that was a shock."

I think you are right on the mark with this point. I would not be surprised at all if this were not the reason for the abrupt about face from the bishop in abandoning negotiation: he never in his wildest dreams imagined a majority, let alone a super majority would vote to leave the diocese. He was negotiating with the assumption of a certain outcome, and when he was faced with the shock of reality, he sued.

Btw, keep up the great work you do. The information and insight you provide is invaluable for anyone wanting to know what is going on with these lawsuits in Virgina.

The Standing Committee, many of whom I knew, had no illusions about what would happen. There was no shock, only sadness. The 40 days of discernment process is designed to end with one result.

So you're correct, BB, that you can "only speculate" and, in fact, do so incorrectly.

BB - why not ask some of them? I think all would like to know.

Good luck convincing the VA Supreme Court that 57-9 is unconstitutional.

"The Standing Committee, many of whom I knew...." Let me guess... the list is in your suit pocket which you left in your luggage.