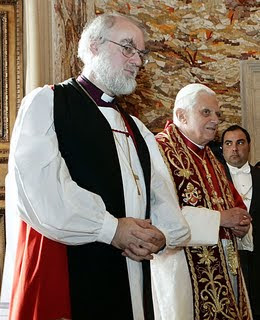 From the Associate Press:

VATICAN CITY — The Vatican says Pope Benedict XVI will meet with the Archbishop of Canterbury next month in the leaders' first encounter since the Catholic church moved to make it easier for disenchanted Anglicans to convert to Catholicism.

Vatican spokesman, the Rev. Federico Lombardi, said in a telephone interview Friday evening that Archbishop Rowan Williams was already due to visit Rome for ceremonies at a pontifical university to honor a late cardinal who worked for Christian unity.

Taking advantage of the archbishop's presence in Rome, Benedict will receive Williams on Nov. 21 at the Vatican.

The Vatican's recent move to ease Anglican conversions came as some Anglicans are upset by their church's allowing openly gay clergy and blessing same-sex unions.

Oh, to be a fly on the wall for that conversation!

My favorite comment on all this, from a good RC friend who cheerfully describes himself as a "knuckle dragging conservative, was "Benny did WHAT?!"

I think this it a good thing that the disaffected Anglo-Catholics and '28 prayerbook types can jump to Rome. Of course, that may be because I'm an Episcopalian.

How is an Anglican, Episcopalian, or Roman Catholic defined? By a systems of common beliefs and understandings? If a vote changes the beliefs or practice, are you still in the same denomination or has a new denomination been created?

If Episcopalians are newly defined by votes on doctrine, on issues that should arguably be decided at the level of an ecumenical council, are they still Episcopalians?

I don't know the answers, but am agonizing over these questions.

If God seems far away, who moved?

ABC should have summoned the Pope to go to Canterbury! But of course that's like asking NASA to send a manned spaceship to Jupiter. ABC, instead of reminding the Pope of Roman heresy and excesses up to the 16th Century, runs to Rome.

Thank you to Anon at 6:18 PM. You proved our prediction that TEC would see it just that way. Not all of us see that as a valid option. Sorry! ;-)

The 1928 service is beautiful, though. It helps one to own up to your own mistakes and acknowledge responsibility. Suggest anyone review it. You can find it online if you don't know where a copy is available. We are poorer for its replacement with the 1979 BCP.

Don - We think your question was rhetorical - TEC chose to move and keeps moving in its own direction. They refuse to hear "Stop!" from anyone.

Our guess is nothing much will happen from this meeting either.

Anon @ 6:18--
Having a fondness for the '28 prayer book has no implications for a fondness for Rome. One can be a dedicated Calvinist and still prefer the '28.

In fact, if a fondness for the '28 were a motive, the one who 'jumps' may well be disappointed. I attended a Roman service with some friends lately, and was regaled with some rather tepid 'contemporary' praise music, with nary a thee nor a thou heard in the liturgy.

Perhaps you are a recent Episcopalian, with no experience with the '28. That, along with a callous disregard for the history of your denomination, would explain your ignorance on these issues.

BB,
I've spoken with a number of people in the last week or so regarding Rome's offer, but know of no one in any jurisdiction who seem to be taking them up on it. Not even Continuers of the Forward in Faith variety. One might think that the Vatican leaked the information prematurely. Was this deliberate or accidental? If it was a warning shot to awaken RW, did it work? I rather think not. If they were simply testing the waters to see how many will take them up on it, so far very few. Having, myself, been a Roman Catholic; my guess would be that those who were or are going to Cross the Tiber either have or will do so, regardless of any such offer. The only ones quibbling over this are clerics who fancy that Rome will either recognize their orders, which I am sure they won't, or that they will be assured of ordination once they convert. In any event it will be Rome's deal on Rome's terms. Yet the whining and speculating will preoccupy some Anglicans for months to come. Stay-tuned for updates.