Archbishop of Canterbury challenged by "Pope's wooing of Anglicans" 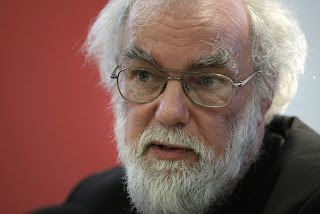 From the Wall Street Journal:

Archbishop Williams is the top official in the Church of England and the "first among equals" of the global church leaders that guide the 80-million-strong Anglican Communion. That puts him in the crucial position of holding the Anglican faithful together in the wake of the Vatican's surprise move this week to make it easier for disgruntled Anglicans to convert to Catholicism.

For several years, Archbishop Williams has attempted to unify an already divided global community of Anglicans. Internecine battles over same-sex marriage, the consecration of women bishops and the authority of Scripture threaten to splinter the world's third-largest Christian group.

But unlike Pope Benedict -- who has singular authority over 1.1 billion Roman Catholics -- Archbishop Williams lacks many tools to force cooperation among his church's factions. He can cajole and persuade, but in the end the many churches within the Anglican Communion have a great deal of autonomy, including the Church of England.

"What is he going to do? That's the $64,000 question," said Stephen Parkinson, director of Forward in Faith, an Anglo-Catholic advocacy group within the Church of England that has reacted warmly to the Vatican's move. "Does he try to hold it all together, or does he simply say bon voyage to those who want to take the Vatican's offer?"

Archbishop Williams couldn't be reached for comment. In a letter to Church leaders Tuesday, Archbishop Williams apologized for not alerting his colleagues sooner, but said he himself heard about the Vatican's move only at a "very late stage." He also issued a joint statement with the Roman Catholic Archbishop of Westminster reaffirming the interfaith dialogue between the two Churches that goes back more than 40 years.

The Anglican Communion is one of the last vestiges of the old British Empire. Faith followed trade and the flag, planting the Anglican Church in far-flung places such as Singapore, Tanzania, Canada and South Africa. But the Anglican Communion, by design, has always had a more passive leadership structure, which permitted different forms of Anglicanism to flourish during its more-than-470-year existence.

This diversity, however, has become increasingly tough to manage. Anglicanism was established apart from Rome in 1534 by Henry VIII for several reasons, including the pope's refusal to offer him an annulment. Since then, the Church of England, the mother church of Anglicanism, has grown to include evangelicals, Anglo-Catholics and liberals, among others. The divergent views of each have become increasingly difficult to bridge.

Archbishop Williams, an amiable Welshman with a fondness for rugby, has found himself whipsawed by the winds of social change since ascending to his current position in early 2003. In that year, the Episcopal Church, the U.S. arm of Anglicanism, consecrated an openly gay bishop, sending the Anglican Communion into infighting that has shown no sign of letting up. Archbishop Peter Akinola, head of the Church of Nigeria and one of the most powerful members of the church who leads Africa's 40 million Anglicans, has repeatedly condemned Western Anglicans' move toward a more liberal interpretation of the Bible.

In a bid to keep the Anglican Communion together, Archbishop Williams has argued for a potential "two track" solution to the problems gripping both the Church of England and the Anglican Communion. The idea is that liberals would find common ground along one track and conservatives along another, but they would all remain under the big tent of Anglicanism.

"It helps to be clear about these possible futures, however much we think them less than ideal, and to speak about them not in apocalyptic terms of schism and excommunication but plainly as what they are -- two styles of being Anglican," Archbishop Williams wrote over the summer following the U.S. Episcopal Church's National Convention.

The Episcopal Church, one of the most important provinces in the Anglican Church, has been a challenge for Archbishop Williams since he took office. The Church has been active in backing socially liberal causes, drawing the ire of other Churches in the Communion, notably the large Churches in Africa.

Orthodox critics argue that he should be more assertive in facing down liberals, or at least in pushing for the establishment of "safe" places for those who dissented from such ideas as same-sex blessings and the wider consecration of women as priests and bishops.

The archbishop's two-track approach may be a tougher proposition in the wake of the Vatican's announcement. If enough conservatives take up the Vatican offer, it could diminish the need for two styles of Anglicanism. Ironically, some say that the Vatican's appeal could simplify the church's politics going forward. "This could be the answer to [Archbishop Williams's] prayers," said Forward in Faith's Mr. Parkinson.

Some progressives also think the Vatican move could help resolve the conflicts that have dogged the Church.

"The Vatican announcement this week, if you like, ought to take the heat out of the argument," said the Rev. Cannon Giles Goddard, chairman of the Inclusive Church, a liberal group in the Church of England. "Those opposed to the consecration of women bishops now have somewhere else to go, and that ought to make it easier for the Church of England to find a solution to that issue."

But that might also leave a smaller, homogenous Church behind. And evangelical conservatives with less natural warmth toward Rome are concerned that the Vatican may be peeling away a key ally. The many conservative groups within the Church, including Anglo-Catholics, have recently started working together under the banner of the Fellowship of Confessing Anglicans. They endorse the idea of a two-track approach, giving liberals and conservatives separate oversight.

"But that might also leave a smaller, homogenous Church behind."

There's the rub. One of the most remarkable stories of this day is watching evangelicals become -- far too slowly, true! -- more catholic (small "c") in realizing the value of the larger body of Christ. Any event that would segment us more into our own divisions (whether evangelicals alone, Anglo-Catholics alone, or what have you) is a huge step backward, and something not to be desired.

So when are Anglicans going to provide a special provision for Roman Catholics who want to switch over to the Anglican Church because of defects in the Roman church?

Hmmm... Raphael, perhaps that will be when Anglicans achieve a moral standing and integrity that outweighs its current plethora of defects and divisions. Such a state is unlikely to exist before there is a change in who sits in the chair of St. Augustine.

Dear Rolin, you're right about getting the right person in Augustine's chair. For the record, I admire the holy father. He's a leader!

What I cant get over is RW. He sat with a cardenal who publicly announced plans to "poach" anglicans. Thats like smiling at someone who's about to enter your house and take away the furniture without your permission.

If I was the ABC, I'd get my shotgun, run that Cardenal out of town and protect my flock

RE: "There's the rub. One of the most remarkable stories of this day is watching evangelicals become -- far too slowly, true! -- more catholic (small "c") in realizing the value of the larger body of Christ. "

Evangelicals have always had a nature to divide for purity or sake of what whever they hold dear. Then Anglo-Catholics have as well (thinking Continuing Church splits or forcing Pope Leo XIII's hand). Some crazy Baptist (as in a prof. a TEDS said the reason they have speedbumps on campus or another friend remembers him naming by name individuals in an audience as dangerous to Chistiandom) wrote in a book of Evangelicals & Catholics Together, that in the consenstration camps, GULAG and other places of great pressure, that we desire to work together (not just thinking of RC/Protestant divide but Protestant/Protestant RC/RC, RC/EO, EO/EO divides).

Lord forgive us ... we are stubborn!