The LA Times gets a "first-listen" to Dylan's new outstanding new Christmas Album - and, yes, Dylan even sings in Latin! 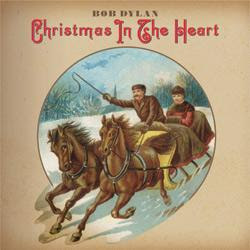 It's just getting better and better. From here:

Despite some skeptical public reaction to news that Bob Dylan has made a Christmas album -- “Another sign that the end times are near,” a friend wrote in an e-mail linking to the Amazon Web page -- it’s no joke. And judging from half a dozen songs I was able to preview at a listening session Wednesday evening, it is a ton of fun.

“Christmas in the Heart” is due Oct. 13, and Dylan was still finalizing the song selection and sequencing this week, which is one reason a handful of music journalists weren’t able to hear the whole thing.

But the Currier and Ives-ish cover image is a good clue as to what Dylan is after on this set of traditional carols and recent vintage Christmas chestnuts -- beyond the charity aspect. (All of Dylan’s royalties -- in perpetuity -- will be divvied up among three organizations that help feed the hungry: Feeding America, U.K.-based Crisis and the United Nations’ World Food Program, which made a snarky Reuters story earlier this week about an early-download arrangement between Sony Music and Citibank seem especially misguided.)

Rather than simply a tossed-off session for his kids and grandkids, Dylan seems to be offering up an astute exploration of the roots of holiday music -- Christmas records in particular -- in the same way he has returned in various albums over the years to mine pop music’s foundation in blues, folk, country and gospel.

His version of “Must Be Santa,” with David Hidalgo squeezing reindeer-quick accordion, is directly inspired by the arrangement that Texas rock-polka group Brave Combo created on its 1991 gem of a seasonal album, “It’s Christmas, Man!” Better yet, there's a video on the way, shot here in L.A. Dylan's treatment of “Here Comes Santa Claus” goes straight back to Gene Autry’s 1947 version, with a guitar solo that mirrors the original, melodically and tonally.

He goes back even further with “O Come All Ye Faithful (Adeste Fideles),” singing the first verse in Hibbing, Minn.-accented Latin. Quattuor astri!

The arrangement of “Christmas Island” splits the difference between the Andrews Sisters-Guy Lombardo rendition from the '40s and pop throwback Leon Redbone’s wonderfully craggy 1987 recording. Taking on Mel Tormé’s “The Christmas Song,” Dylan’s grizzled voice sounds at times like a vocal cord or two might have been roasting on the open fire alongside those chestnuts.

Choral support on several of the previewed tracks recalls the Ray Conniff Singers, Mitch Miller and other such ensembles whose holiday albums were staples of the '50s and '60s, the soundscapes equally expansive and sonorous, favoring reverb-drenched chimes, xylophones and bells over the tight, fat and bluesy sound of Dylan's recent studio albums.

We can only hope that when the rest of the music surfaces, Dylan takes his cue from Dwight Yoakam and serves up a mariachi treatment of “Silver Bells.”

I might be more excited about this than I was about thew news of his last album. Right now, Sufjan and Andrew Peterson are our house's Christmas soundtrack. I really looking forward to adding Dylan to that.