Father Damien made a saint 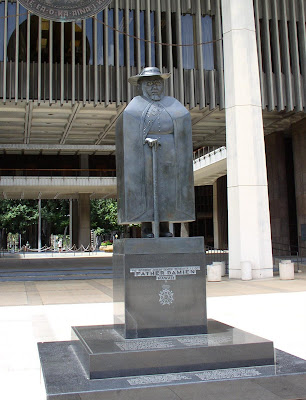 One of my heroes is made a saint by the Roman Catholic Church - though he has been a saint to Hawaii for a century. A great day.

By the way, this photo is of the statue of Father Damien in front of the the State House of the State of Hawaii. Pretty interesting that a religious figure should have such a prominent place in front of the official building of government - but that illustrates just what sort of impact this one man had on an entire culture and indeed now on an entire world. God bless him.
Posted by Unknown at 9:18 AM

Actually, he was made a saint by the Grace of God. All the Church did was declare his sanctity.

BB we may not agree on much but Father Damien has always been one of my heroes in the church. A man of great faith and humility.

That same statue (or a replica thereof) is in Statuary Hall in the US Capitol.