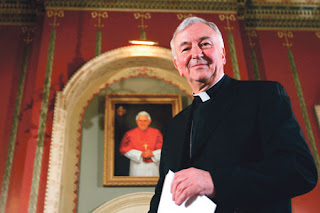 Something big seems to be brewing in Rome and London. This from the Vatican:

We inform accredited journalists that tomorrow, Tuesday 20 October 2009, at 11am, in the John Paul II Hall of the Press Office of the Holy See, a briefing will be held on a theme pertaining to the relationship with the Anglicans, at which His Eminence Cardinal William Joseph Levada, Prefect of the Sacred Congregation for the Doctrine of the Faith, and His Excellency Mgr Joseph Augustine Di Noia OP, Secretary of the Congregation for Divine Worship and the Discipline of the Sacraments will take part.

And this, from the Archbishop of Canterbury’s office: 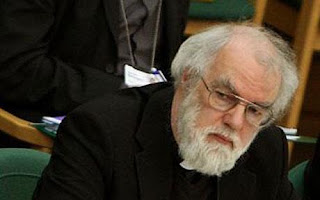 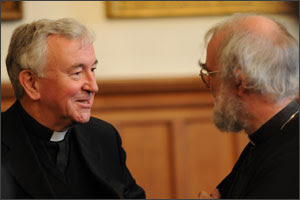 Today’s announcement of the Apostolic Constitution is a response by Pope Benedict XVI to a number of requests over the past few years to the Holy See from groups of Anglicans who wish to enter into full visible communion with the Roman Catholic Church, and are willing to declare that they share a common Catholic faith and accept the Petrine ministry as willed by Christ for his Church.

Pope Benedict XVI has approved, within the Apostolic Constitution, a canonical structure that provides for Personal Ordinariates, which will allow former Anglicans to enter full communion with the Catholic Church while preserving elements of distinctive Anglican spiritual patrimony.

The Apostolic Constitution is further recognition of the substantial overlap in faith, doctrine and spirituality between the Catholic Church and the Anglican tradition. Without the dialogues of the past forty years, this recognition would not have been possible, nor would hopes for full visible unity have been nurtured. In this sense, this Apostolic Constitution is one consequence of ecumenical dialogue between the Catholic Church and the Anglican Communion.

With God’s grace and prayer we are determined that our on-going mutual commitment and consultation on these and other matters should continue to be strengthened. Locally, in the spirit of IARCCUM, we look forward to building on the pattern of shared meetings between the Catholic Bishops Conference of England and Wales and the Church of England’s House of Bishops with a focus on our common mission. Joint days of reflection and prayer were begun in Leeds in 2006 and continued in Lambeth in 2008, and further meetings are in preparation. This close cooperation will continue as we grow together in unity and mission, in witness to the Gospel in our country, and in the Church at large.

“The Vatican is opening a door for Anglicans who sense a call to be part of the Church of Rome to join that body and still maintain Anglican traditions. This move by the Catholic Church recognizes the reality of the divide within the Anglican Communion and affirms the decision to create a new North American province that embraces biblical truth. While we welcome the positive response from the Anglican Archbishop of Canterbury regarding the Vatican’s provision, we urge Lambeth Palace to move swiftly to fully endorse the efforts of the Fellowship of Confessing Anglicans and the Anglican Church in North America to keep the Anglican family together,” said Bishop Minns.

“Rome is reminding Anglicans that our historic, orthodox faith is more important than culture and more important than geography. CANA itself bears witness to the fact that God’s church is made up of believers across the globe. The centrality of Jesus Christ and the authority of Scripture are the unwavering bonds that have drawn CANA churches and others within the Anglican Church in North America together. Our continued prayer is for Anglicans across the world to be able to stay faithful to orthodox beliefs,” Minns concluded.

This at at time when the Orthodox are entering into dialog.

And yet, the doctrines of all three faiths differ slightly. At some point, people will have to make a decision of which one they think is right. Hopefully, they will look at teachings, history, etc. and not just jump from one to another. We should pray for discernment for all involved.

Signing an historic ‘covenant’ between Nashotah House and St. Vladimir’s Seminary, traditional Anglicans and leaders in the Orthodox Church in America (OCA) have pledged themselves to work towards unity. Speaking to an audience of more than one hundred and fifty people, ACNA (Anglican Church in North America) Archbishop Robert Duncan stated that signing the conference’s inter-seminary covenant, committing Nashotah House and St. Vladimir’s seminaries to mutual prayer and fellowship, “lays the groundwork of something very much larger”, that is, “serious dialogue” with the OCA.

Metropolitan Jonah stated: “The Orthodox Church has this central vision of being united in Christ by the Spirit to the Father and we cannot bear not to be united to one another. This is really about our identity as Christians, it’s not about labels, institutes, it’s about the living reality of our communion in Christ by the Holy Spirit... (this) must be made manifest by our communion in the Chalice... of our eternal life.” “That’s the goal of our dialogue, absolute unity,” said the Metropolitan, and this will be “actualized through repentance, a mutual striving towards God and the will of God.” Future discussions have been set between the two bodies, although no details have been made public.

I've been banned from StandFirm for comments similar to what I posted above (and providing the above link!) see "Damian" #3.

I'm not sure I understand why as others put things in that are off-topic and I see many links in posts. However.....

Knowing how closely you are connected, I will not wait for the cream pies. I will quietly go away from here, too.....