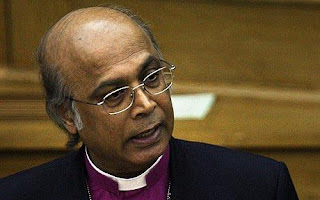 My very first entry at BabyBlueOnline.org was on the visit of the Bishop of Rochester, Michael Nazir-Ali to Truro on April 2, 2006, called Conversations at Common Grounds. Today Bishop Nazir-Ali returned to Truro and has been with us all morning, preaching at all the services, as well as speaking at smaller gatherings. Later on this afternoon he is speaking to a gathering sponsored by the Convocation of Anglicans in North America (CANA) in the Truro Chapel at 5:30 p.m.

LATER: Tonight Bishop Nazir-Ali spoke on the nature of Anglicanism and the nature of Christian Mission as well as forming a response to extreme Islam. He defined Anglicanism this way: "I have received the faith of the Apostles and I believed this was a way to pass it on." The question in front of him was, "How can the Anglican Church be the catholic church in a particular place? He found that in Anglicanism. What he sees is a spiritual relationship emerging amongst Anglicans. It's not a system, as often has been the case - but a spiritual relationship among Anglicans around the world. So he could feel at home at Truro because we share the faith of the Apostles.

The Anglican Church in North America, he said, is seen by many as a beacon of hope.

"You are showing us that it is possible to be apostolic, orthodox, and biblical in the West," Bishop Nazir-Ali said.

He outlined that in fact, defects in the process led to the current breakdown in the Episcopal Church's relationship with the rest of the Anglican Communion. "There must a process where we make decisions together," he said. Some things are best at the local level, he said - but there are some things that can only be decided by the wider community. The apostolic teaching can be recovered, he said.

Bishop Nazir-Ali also spoke at length on understanding the growing acceptance of Sharia Law in Great Britain and he explained why Christians should be wary of this, including how women are actually treated under Sharia Law. "Christian hospitality is one thing," the bishop said, "but multiculturalism is quite another thing."
Posted by Unknown at 3:11 PM

In addition to being a clear voice for orthodoxy, +Michael remains one of the treasures of the Amglican Communion.