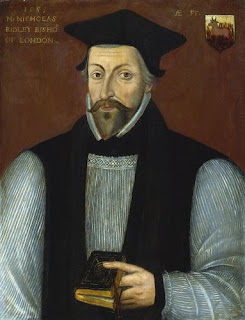 Be of good comfort, Master Ridley, and play the man; we shall this day light such a candle, by God’s grace, in England, as I trust shall never be put out. -Hugh Latimer 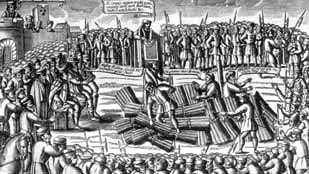 Nicholas Ridley became an adherent of the Protestant cause while a student at Cambridge. He was a friend of Archbishop Cranmer and became private chaplain first to Cranmer and then to King Henry. Under the reign of Edward, he became bishop of Rochester, and was part of the committee that drew up the first English Book of Common Prayer. When Mary came to the throne, he was arrested, tried, and burned with Latimer at Oxford on 16 October 1555.

Keep us, O Lord, constant in faith and zealous in witness, after the examples of your servants Hugh Latimer, Nicholas Ridley, and Thomas Cranmer; that we may live in your fear, die in your favor, and rest in your peace; for the sake of Jesus Christ your Son our Lord, who lives and reigns with you and the Holy Spirit, one God, now and for ever.
Posted by Unknown at 3:33 PM

What passes for Anglicanism, generally, these days is unworthy of the memories of the Martyrs of the English Reformation. They are gone and sadly forgotten. Mass anyone?

BB,
The fact that I've been the only one to comment on this confirms my fear, that the English Martyrs are indeed forgotten.

Alas, our martyred brothers who have gone before us are not forgotten! Our son, Owen Ridley (Ridley is his middle name), now aged 12, just finished writing a paper on his namesake. We frequently remind our son that he is named for one who, like many others, counted the comforts and temporal pleasures of this life worth nothing in comparison to the weight of glory that awaits the faithful. Our prayer for him as ourselves, is that we would walk worthy of the Savior and be willing to give all for the One who gave all for us. Happy Easter--Jesus lives and so shall I--death, thy sting is gone forever!

here in america, as pagan as we have become, my 10 gr uncle, Dr. Ridley and his noble fellowe, Latimer, are remembered ea Oct16th in our Episcopal churches. i am sure each of you know this. but, sadly, you are correct-they are, largely forgotten,it would appear. The Ridleys came to Southampton, VA, in 1635, escaping Cromwell's confiscation of the Ridley holdings in Northumberland. I think Christ's return is quite soon--do you? and, if we are correct, these brave ministers will be forgotten no more. Thanks for your time!