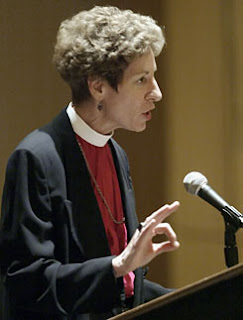 It must be really bad. When asked by a blogger who took part in a recent media conference call with the 815 leadership why the 2008 figures haven't been released, the Presiding Bishop said, "I, I’m sorry. I’m not able to comment on that at the moment. I don’t have it in my head." I can only imagine what would happen if a rector said that to a congregation. House of Deputies President echoed that sentiment when asked why the 2008 figures are not being released after being promised in September saying, "We don’t know. I mean we have it written out but we’ll be posting it I’m sure as soon as we’re, they’re, approved and available." Whenever that is.

In fact, the 2008 charts seem to be available and you can see them here. It looks pretty bad, especially in the progressive dioceses. The "Episcopal" Diocese of San Joaquin is a pip. It looks like there was some sort of cataclysmic disaster there - oh yeah, there was.

What is it going to take for the leadership of The Episcopal Church to wake up and realize, it's not working?
Posted by Unknown at 10:49 AM

If you check the chart now, you will find that the 2008 statistics for Holy Apostles are exactly the same as 2007. By using the 2007 St. Bartholomew's figures rather than what were apparently the true figures for Holy Apostles in 2008, they avoid showing a loss of nearly 1000 members and about 450 ASA, in this church alone.

The mendacity of these people is really something to behold.