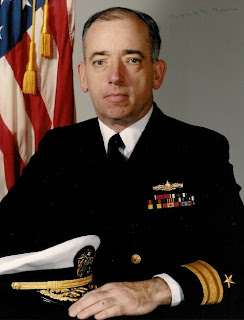 Many of you have been aware that we've been praying for my Uncle Bob and I appreciate your prayers so very much. Uncle Bob passed away this morning. I am so grateful for him and for his life and for how he lived his life, the example he set not only with whom with whom he served, but also for his family. He loved his family and his country. I will miss him!

Shore assignments include postgraduate education at the Naval Postgraduate School in Monterrey, California, where Rear Admiral Ailes received a Masters Degree in Operations Analysis; Nuclear Engineering Training at Bainbridge, Maryland, and West Milton, New York; duty as Commanding Officer and Director of the Officer Department of the U.S. Naval Nuclear Power School at Mare Island, California; duty in Washington as the Director of the Naval Forces Division in the Office of the Assistant Secretary of Defense for Systems Analysis, Director of the Anti-Air Warfare Division in the Office of the Director for Naval Warfare and Director, Surface Combat Systems Division in the Office of the Deputy Chief of Naval Operations for Surface Warfare. Rear Admiral Ailes was also Deputy Commander for Weapons and Combat Systems of the Naval Sea Systems Command as well as Commander, Space and Naval Warfare Sea Systems Command and served for 35 years in the United States Navy.

He was also on the faculty of George Mason University

Rear Admiral Ailes is the son of Rear Admiral and Mrs. John W. Ailes of Pittsburgh, Pennsylvania. He is married to the former Clara Swift of Arlington, Virginia. They have two children: Susan and Lynn and six grandchildren and one great-grandchild.

In addition to all of this, he also participated in the Couples Night Out show at the Naval Yard each year with my aunt and loved hiking in the Blue Ridge Mountains with her. They have been married for 51 years.

LATER: Tonight we got out a lot of old pictures. Uncle Bob and Aunt Clara actually met in Junior High School in Arlington, Virginia, and later were classmates at the old Western High School in Washington, D.C. where my own parents also met in 10th grade. Looking at the pictures was like looking at American 20th century history, all rolled up into one family.

Tonight, as I remember Uncle Bob I remember his love for the Navy, passed down from his father and continues to own children, nephews and in another few weeks, his own grandson as well. Tomorrow is the Army/Navy Game, which for many years was an annual event in my family. I am sad he will miss the game - we were talking about only a few days ago - but I am grateful that he lived and not only is my family for better for it, so is my country.

UPDATE: My young cousin, Uncle Bob's grandson, wrote this on his Facebook page, "R.I.P Robert Ailes, December 11, 2009. To a brilliant and caring friend, mentor, and above all grandfather that i will always look up to, and keep in my heart." It's so interesting to connect as family on Facebook as we remember Uncle Bob, grandfather, brother, and friend.
Posted by Unknown at 3:29 PM

Mary,
You and your family have my condolences.

I'm so sorry to hear of your loss and praying for you and your family.

My heart and prayers are with you and your family. The Lord be with you, to comfort each of your hearts at this time of loss. May His very near Presence be the great consolation.

Giving thanks for his life's work, invested in defending freedom.

My condolences for you and your family.

Our prayers and condolences, BB

I too had an Uncle Bob, my namesake, who sounds much like yours. May the Lord bless and keep you and your family at this time. Bob K.

Mary, thank you for this life story and the picture of Uncle Bob. I continue to pray for you and your family.
Judy A

Thoughts and prayers with you and your family at this time Mary.

May his memory be eternal

May God richly bless you and your family. It is good to read more here about your uncle Bob.

It's been a privilege to pray with you for your family and for Bob.

Sorry to read of your loss. Condolences.

BB,
I am sorry to hear the news about your uncle. I will be praying for him and for your family as part of the Prayer of the People this Wednesday evening at the Cathedral in Second Life.

There are several hymns that I simply adore and that carry with them tremendous religious force and sentimental value. Nothing quite tops Eternal Father, Strong to Save.

Your uncle is part of an honorable and admirable tradition of service to this country.