George Will: "The Episcopal Church has become a MoveOn.org at prayer - liberal politics in vestments" 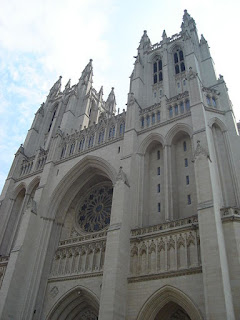 In a profile on Thomas Reese, S.J., George Will writes of "2009's most intriguing development in Christianity."

Having seen much change -- and much resistance to it -- Reese is relaxed about 2009's most intriguing development in Christianity, the Vatican's enticement of disaffected Anglicans. Rome is saying to individuals, and perhaps to entire parishes and even dioceses: "Come on over." It is trolling with rules, recently written, that will enable Anglicans-become-Catholics to retain some of their liturgy. The church will accept some already married priests, and perhaps married seminarians, but not bishops.

The Vatican says it is not raiding but merely answers to Anglican knocks on its door. Combined, however, with Pope Benedict XVI's having appealed to dissident conservative Catholics by removing most restrictions on celebrating the traditional Latin Mass, the courtship of Anglicans looks like an aggressive -- although not improperly so -- attempt to consolidate an expanded Catholicism.

There are 1.1 billion Catholics. Anglicanism is the third-largest Christian communion (Eastern Orthodox is second) but has just 80 million adherents, of whom only 2.3 million are Americans, and a mere 16,000 of them -- those in New Hampshire -- have helped to precipitate the Vatican's move. The election of a gay Episcopalian as New Hampshire's bishop was one brick over a load for conservatives, who think the Episcopal Church has become a Moveon.org at prayer -- liberal politics in vestments.

George Will thinks the Romans are drifting toward a married priesthood, and he's always good for a one-liner: "the law of unintended consequences contains no exemptions for the merely infallible."

Actually, George Will did not say that the Episcopal Church has become a "Moveon.org at prayer" etc. His column stated that "conservatives" regard them as such. Small difference, perhaps,but important, I submit. As a political conservative, I understand the sentiment Will is describing, but also think that the distinction between Will writing about what others are thinking and expressing an opinion himself is an important one.

Yes, Will was talking about me when he wrote about those "who think the Episcopal Church has become a Moveon.org at prayer -- liberal politics in vestments." I would add, however, that the TECers are not actually "at prayer." They are only pretending to pray. Political correctness is the entire point for them. My best wishes to those who actually pray but are still stuck in the wilderness.

Perhaps a healthy ration of gross generalization there, Scott? Thinking in lumps like that does little for fellowship among Christians. I'm sure there is a wide range of sincerity and profundity in the prayers of Christians of all flavors and stripes.

I can't speak for Scott, but I do believe that when the typical Episcopalian prays he/she/it is either praying to someone/something that no reasonable Christian would recognize as the God of Abraham, or he/she/it is not really praying at all.

I have seen too much degradation of Christian belief in my own parish -- one usually regarded as a flagship Anglo-Catholic parish in the Diocese of Washington -- because of the advance of perversion that there are some parts of the Church that will not be redeemed without divine intervention, which has not occurred in TEC to date.

I think it is very dangerous when we try to declare motives for other people.

Do you believe that you know when someone is "really praying"! Or who that prayer is directed to if they pray in the name of Jesus.

And what you see in your own locality may or may not be the same that is happening in other Episcopal churches.

We are all sinners. And we are all in different places in our walk with God. We are at different stages of being transformed into the likeness of Christ. Just because God has already dealt with one of your sins, doesn't mean that all people must have dealt with the same sin or they are not true believers. They may be miles ahead of you on the journey, having more profound changes from where they began than you have.

Jesus gave us instruction on this. He only made us fruit inspectors. We can judge the fruit, but not the heart.

I am old enough (alas) to remember how naturally people in the Old South would whip off as axiomatic breathtaking broad, categorical insults about certain classes of others in the middle of the last century. As a child, I thought it odd then, and I must say I get wary when I see the same kind of groupthink applied in other contexts. It is a pervasive weakness of the human mind's propensity to try to group things conveniently, especially when empirical data are in tension with favorite uninformed notions. It is also an exhaust pipe of the darker parts of the human soul.

Scott and Anon 0041 reflect a kind of categorical damnation of huge classes of people that would be bad enough in a secular context, but seems especially dodgy when used to impugn the prayers or faith of Episcopalians at large. It is more than a little disturbing to see how easily so many people have lapsed into a reflexive We/They, Us/Them paradigm in addressing these tensions within the Church. I'm sure I am not at the top of the list of God's favorites, but I am an Episcopalian and when I pray, I strive within my mortal limitations for sincerity and appropriate approach. To have someone denigrate my relationship with God as either Pagan or fakery simply because I worship as an Episcopalian strikes me as a peculiarly bad use of the heart and mind. This is a mindset that can be used to justify great unfairnesses and actions that most Christians would normally not wish to be associated with. Indeed, I think that has happened in our recent strife.

In all these discussions, unless someone expressly self-identifies as a Pagan, a heretic, or as a conscious, practising hypocrite, I think it would be best not to assume that any particular Christian is not trying hard to live up to the standards that the Lord set for us.

Scout, once again I do agree with you there. :-)

A point people haven't talked about a lot; I think Mr Will is spot-on: "many of the conservative Anglicans to whom Rome is beckoning are apt to be especially serious about the theological differences with Rome that have defined Anglicanism for almost five centuries, including the nature of the sacraments, veneration of Mary, and papal infallibility."