Progressives target the Archbishop of Canterbury 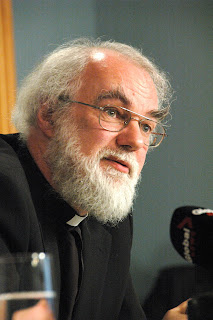 Andrew Carey writes of liberals playing dirty. I haven't quite figured out why they are so angry since things appear to be going so well for them. From here:

It’s clear that liberal Anglicans are now targeting the Archbishop of Canterbury in a vitriolic campaign aimed at deflecting attention from their inability to win the argument over human sexuality on theological grounds.

The fall-out from the election in Los Angeles of a lesbian priest as assistant bishop has added to the pressure on Dr Rowan Williams from both sides in the dispute. Traditionalists are calling on him to make stronger statements condemning The Episcopal Church, while liberals are enraged that he would even dare to mildly question the American Church’s absolute and unfettered right to make its own decisions without regard for anyone else. To have their cake and eat it is the US style of belonging to international bodies and institutions.

The revisionist reading of the Bible based on special pleading and cultural relativism has left the majority of Anglicans unconvinced that there are grounds for overturning the church’s teaching on marriage and sexuality.

The unfortunate problem that liberals face is that their case was most intelligently made in Dr Williams’ lecture, ‘The Body’s Grace’. It hardly helps their case when he has intimated that he may no longer believe the argument himself.

“Archbishop Rowan is wrong as a Christian, he is wrong for the Church of England and he is wrong for the Anglican Communion,” said Colin Coward, the gay rights activist this week (‘Williams affirming image of Church as a place of prejudice and homophobia’, The Times, December 8, 2009). This was a relatively mild criticism compared to some of the vitriol on the liberal ‘Thinking Anglicans’ website (www.thinkinganglicans.co.uk).

The trouble is that liberal Anglicans seem to think that they have some sort of ownership of, or investment in, the Archbishop of Canterbury. It’s true that many of them strove to get him appointed, but they’d misunderstood both him and the nature of the office he was to undertake if they thought he was going to be their man from that day forwards.

The anger and vitriol also arises from a contrast they point to between his speedy reaction to the election of the lesbian priest, Canon Mary Glasspool, and his failure to condemn the anti-homosexual bill currently going through the Ugandan Parliament. The proposed bill in Uganda is indeed a dreadful and Draconian piece of legislation. If passed in its current form it would result in the death penalty for homosexuals, and a prison sentence or fine for anyone failing to report them. One couldn’t think of many more unChristian and pernicious pieces of law than this. Yet, there is disagreement in Uganda over the proposals among church leaders, legislators and the public so it is not too late for the Archbishop to intervene behind-the-scenes to persuade the Church of Uganda to come out strongly against the proposals, and even to levy pressure on the government.

But everyone still wants a public statement even though such a reaction from a high-profile representative of the former colonial power might actually have a counter-productive effect.

I’ve criticised the Archbishop in the past for not speaking out for persecuted Christians in many countries. In particular, I’ve often felt that he should openly oppose the blasphemy law in Pakistan which has done so much to make the lives of minorities unbearable. It seemed that year after year he failed to come up to the mark. However it was on a visit to Pakistan this summer that he courageously and firmly raised the issue of the blasphemy laws with the Pakistani government. At a stroke he’d accomplished something far more effective than a rent-a-quote reaction would have accomplished.

Furthermore, there is much unsung private diplomacy and contacts behind the scenes that go on as a result of the Archbishop’s ministry. Much of the ministry of successive Archbishops is private, pastoral and not for public consumption.

Read the entire op/ed here.
Posted by Unknown at 10:35 AM

Just back from the Upper SC election. Andrew Waldo elected. The first ballot (#1 on the linked chart) being invalid, there being one more vote cast than voters present, he was elected on the second ballot.

Yes, the Piskie Left (is that not redundant anymore?) is definitely upset with Rowan Williams. A number of them at Jake's little cesspit are vowing to protest his upcoming visit to Trinity Wall Street. The excuse is the Uganda bill (which I understand has been greatly watered down, and thus improved), but the reality is they are torqued about his insufficient support for sodomite clergy.

As an aside, I asked those assembled at Jake's how many had, given their loathing of national leaders hostile to homosexuals, protested Ayatollah Khatami's speech at the NatCat. After a few evasive responses, I was summarily banned.

The issue isn't the issue, folks. Get your minds around that fact.

They do really eat their own!