NOTE: Five Talents is a thriving charity which provides business training and small loans to thousands of the active poor in the developing world. The projects are delivered in partnership with the indigenous Anglican churches, which through their global reach are able to serve needy communities.

At a Reception in aid of Five Talents on 29 October 2009, Dr. Rowan Williams, the Archbishop of Canterbury, welcomed guests to Lambeth Palace and spoke of his support for the work of Five Talents in the context of the church’s particular role and ability to reach grassroots communities with transformative services. The following is the address by Dr. Williams: 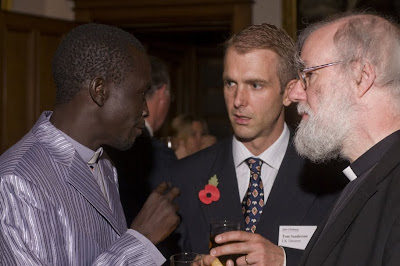 Welcome. It gives me great pleasure to be able to welcome you here for this event. What I am going to do is very briefly to say a little bit about the background in my own memory and experience of Five Talents and a bit about why I believe it matters.

Five Talents is now 10 years old, or rather a little bit more than 10 years old, because at the 1998 Lambeth Conference I remember very vividly an evening where we were discussing the first principles of Five Talents; the occasion when some real substance was being put on the ideal and things were moving forward. And the reason I was involved, I think, was that in my work at that time in the Church in Wales, we had begun very seriously to think through what the Church should be doing about not only personal debt but build up confidence and capacity in local communities that would actually prevent people falling into toxic debt. We had had a programme in the Church in Wales running for a year or so called ‘Debt on our Doorstep’ and what we had decided to do as a Province was to back a Province-wide initiative on microfinance. We were going to send to every parish in Wales a pack telling people how to start credit unions and we went into a three-year partnership with the Wales Co-Operative Centre on training people in microfinance.

Now we did this because we believed that you cannot solve problems like debt without changing people’s mindset. You cannot change people’s mindset without giving them capacity, confidence, skill, a fundamental belief that they are worthwhile as persons and that they can therefore take control of some areas of their lives that they may have thought out of control.

That, it seems to me, is the absolute bottom line of microfinance and it is of course also the Christian rationale for microfinance. While it is true that there is a major and extremely significant Christian imperative to give to the poor, there is also a major Christian imperative to build up people’s liberty and authority and confidence as adult children of God to relate creatively and transformingly to the settings that they live in. And for me that is the theological heart of religion here.

And so because of that experience I think I was invited to share in some of the discussions around those original envisions of the Five Talents initiative.

Over the years Five Talents has now established itself as a crucially important part of the Anglican scene worldwide and I hope that this evening may help it become even more of a part, a visible part of our Anglican ministry. Here at Lambeth Palace we are trying with the help of Rachel, Helen and others to get our work worldwide as an Anglican Communion on development and aid better co-ordinated - working towards an Anglican Alliance on this. And for me a central part of that vision has to be our capacity in microfinance. Because that is the area where perhaps more any other we see that transforming, maturing effect of the gospel on
people that gives them the confidence and the capacity to begin to take charge of where they are and who they are with their neighbours. And the patterns of mutuality and the building up of mutual trust that belong in the world of microcredit and microfinance – these are of course central Christian things. 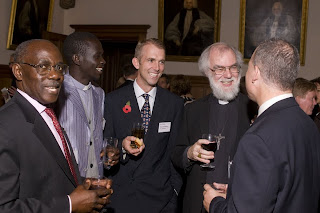 Microfinance has, so to speak, come up the agenda in recent years. From the time when Muhammed Yunus created the Grameen Banks in Southern Asia - a great step forward - that vision has gradually spread. It is been taken up enthusiastically and quite rightly by Christians as well as others. And at the end of a year which has seen some of the macro economic and macro financial climates looking perhaps not quite as sunny as it might have a little while ago, it is not entirely surprising that people have become more interested in how local, small scale grass roots capacity is built up. Now that is where Five Talents comes in. And I am very, very proud to be associated with Five Talents as Patron because I think its moment has come, in a sense, worldwide. It is something that the church can offer with confidence and gratitude to the societies in which it works.

Five Talents works in about a dozen countries and it is helped to train somewhere in the region of 20,000 entrepreneurs, which I think is quite impressive. It is making a measurable difference around the world and for that alone we can give thanks. But if it is true, as I very strongly believe, that in many parts of the world the Christian church is going to be the crucial lever for grassroots development, we need to build capacity as consistently and generously as we can.

One of the constant discussions – far be it from me to say arguments – constant discussions we have with people over the river about development issues really centres on this question. We have been banging away for the last few years at some of the people in DFID and elsewhere to say, if you actually want Millennium Development Goals delivered at grass roots level in many, many parts of the world, not least in Africa, you have to work with the churches. They are the communities that have the confidence in themselves and the trust from their environment. They are the communities that have the reach into places where secular NGOs never get and frankly if you ignore that, you ignore your most potent and creative ally. 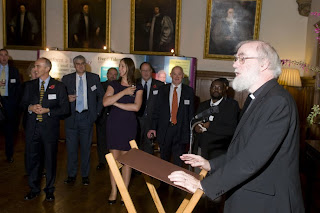 And sadly, philosophy has often been in recent years to ignore them. There has been a sort of embarrassment about faith in general and the Christian church in particular. There has been a conviction that ‘government to government’ is the only pattern that we ought to be working with. There has been a slightly starry-eyed trust that secular western NGOs can somehow gain confidence of profoundly religious communities elsewhere in the world (which really does not work terribly well). And so, if only pragmatically, it is extremely important for our department, other national development agencies and NGOs themselves to wake up to the fact that communities of faith in general and the Christian church in particular are capable of transforming effect.

Now you will hear about Sudan in a few minutes, but one of the statistics that I was able to quote with some smug satisfaction on the radio last year when I was interviewed on some of these matters, was the difference between the number of schools that had been built by churches in international partnerships in Sudan as opposed to the number of schools that secular NGOs had managed to build and the disproportion was vast, because churches are trusted communities.

So in building up capacity, local confidence, the entrepreneurial spirit allied to a co-operative philosophy and spirituality – I think that is also very important – Five Talents is wonderfully placed at present in the world. 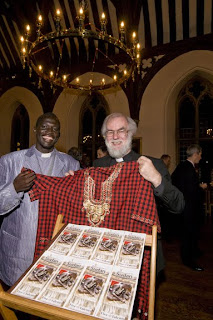 As I said earlier, I am really delighted and grateful and honoured to be associated with it. I hope that some of that sense of the honour and delight at being associated with Five Talents will strike those of you who are not yet associated with it this evening and help you to feel that you would like to be so associated. And I am deeply grateful to God for all that He has done through Five Talents in the last decade to advance that particular form of the Christian Gospel and the Christian good news that simply enables people to stand on their feet and say, “I have something to receive and to give. I am capable of responsibility. I can stand before God with the confidence
of being an adult trusted, not only by God, but by others, winning the trust of the community around me, so beginning to transfigure what is possible for people here.”

So with all that in mind, let me again welcome you here, say how very, very pleased I am that so many responded to our invitation and how very much I hope this evening will not only be an affirmation of the work that has been done through Five Talents but a real step forward for the whole organisation in the Anglican Communion and in the wider setting. Thanks you very much indeed. Learn more about Five Talents and how you can help here. To God be the glory.
Posted by Unknown at 12:29 AM

From everything I know about it, Five Talents rocks. They're doing very important Gospel work, and I'm very pleased to be able to offer wild applause to your post.