Update on the Buddhist "Everyone is the sacred word of God" Episcopal Bishop-elect ... 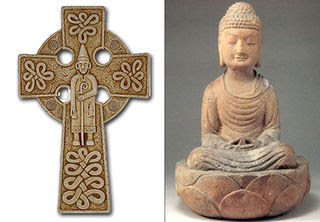 Update from the election of the "Buddhist Bishop" for the Episcopal Diocese of Northern Michigan over at StandFirm. While we wait for the confirm/non-confirms to come in from the Episcopal Church bishops and Standing Committees, Greg Griffith writes at SF, "there has been some discussion among Episcopal "progressives" to the effect that, while Forrester may indeed "walk the path of Zen Buddhism," that fact in and of itself is not reason enough to deny him consent as the next bishop of Northern Michigan. The "reasoning" goes that so long as Forrester is "sufficiently" Christian, that is enough. So now we turn to that question."

And turn to the question they do. Quoting from his writings and public statements (some of which Katharine Jefferts Schori has also signed off on, we might add) SF has posted lines of the Nicene Creed compared with various statements from articles and sermons written or signed Bishop-elect Kevin Forrester.

So standing firm on the "the great emptiness," affirming that "God is present in us and as us," naming "the source" what we want "to name the source," that "we not because we are bad, but because we are blind to the beauty of creation and ourselves," we offer the following affirmation of a faith:


And in one Lord Jesus Christ, the only-begotten Son of God,
"Everyone is the sacred word of God, in whom Christ lives." (Already One in God, response to Dar es Salaam communiqué, to which KTF is a signatory, The Church in Hiawathaland newsletter, Sept 2007)

"We affirm the sacramental gift of all persons, their Christ-ness..." (Already One in God, response to Dar es Salaam communiqué, to which KTF is a signatory, The Church in Hiawathaland newsletter, Sept 2007)


begotten of the Father before all worlds; God of God, Light of Light, very God of very God; begotten, not made, being of one substance with the Father, by whom all things were made. Who, for us men and for our salvation, came down from heaven,
"I would ask us to explore that Jesus does not make us one with God. Jesus reveals, and this is incredible mystery, incredible good news—Jesus reveals to us, and it is why we say that he is the Messiah, he is an anointed one, he reveals to us that we are already at one with God - and why? Because God is always at one with us." (Eucharist sermon, April 6, 2008)

"I see now a Jesus who does not raise the bar to salvation, but lowers it so far that it disappears." (Finding a Place in East and West, The Church in Hiawathaland newsletter, July/August 2004)


and was incarnate by the Holy Spirit of the virgin Mary, and was made man;

Presider: The fire of your Spirit kindled a love between Mary and Joseph; a fire that became the roaring flame of eternal compassion – the heart of Jesus.

Assembly: Here was a child, like all your children, woven into life by the Spirit. (Kindling the Ancient Fire, Sharing Stories of Life-Death-Rebirth, Receiving the Sacred Fruits of Earth, Easter Vigil booklet)


and was crucified also for us under Pontius Pilate; He suffered and was buried; and the third day He rose again, according to the Scriptures;
"Here’s a man in the desert [Jesus’s temptation in the wilderness] talking to His own passions, and He says, 'You know, I am none of those things. I will not identify with any of those things. I am the beloved. I am the beloved.' And resurrection begins to happen. "(Easter sermon, March 23, 2008)


and He shall come again, with glory, to judge the quick and the dead; whose kingdom shall have no end.
"And then Julian [of Norwich] says these words which perhaps are the most important for us when we are afraid and when we are angry: 'For it was a great marvel constantly shown to the soul' – her soul in all these revelations, her experiences of God 'and the soul was contemplated with great diligence this, that our Lord God cannot in his own judgment forgive' – let me read those words again – that God cannot in his own judgment forgive us because he cannot be angry, because God cannot be angry said Julian. This is the Gospel of John. That would be impossible for we are endlessly united to God in love and it is the most impossible thing which could be that God might be angry, for anger and friendship are opposed. That’s the Gospel of John, I’ve called you friends. (Pentecost 22 sermon, Oct 5, 2008 - download audio in MP3 format here)


And I believe in the Holy Ghost, the Lord and Giver of Life; who proceeds from the Father and the Son; who with the Father and the Son together is worshipped and glorified; who spoke by the prophets.
"The Trinitarian structure of life is this: is that everything that is comes from the source. And you can name the source what you want to name the source. And our response to that is with hearts of gratitude and thanksgiving, to return everything back to that source, and there’s a spirit who enables that return. Everything comes from God. We give it back to God. And the spirit gives us the heart of gratitude. That is the Trinitarian nature of life." (Trinity Sunday sermon, May 18, 2008)

"We seek and serve Christ in all persons because all persons are the living Christ. Each and every human being, as a human being, is knit together in God's Spirit, and thus an anointed one – Christ." (Already One in God, response to Dar es Salaam communiqué, to which KTF is a signatory, The Church in Hiawathaland newsletter, Sept 2007)


I acknowledge one baptism for the remission of sins;
"We do harmful and evil things to ourselves and one another, not because we are bad, but because we are blind to the beauty of creation and ourselves." (Already One in God, response to Dar es Salaam communiqué, to which KTF is a signatory, The Church in Hiawathaland newsletter, Sept 2007)


and I look for the resurrection of the dead, and the life of the world to come. Amen.
?

Read it all here. Tip of the Tinfoil to the amazing work of SF.
Posted by Unknown at 12:27 PM

Why am I humming "I am the Walrus" as I read the words of the Bishop-elect? And this zeitgeist is considered "sufficiently Christian"?

1 But know this, that in the last days perilous times will come: 2 For men will be lovers of themselves, lovers of money, boasters, proud, blasphemers, disobedient to parents, unthankful, unholy, 3 unloving, unforgiving, slanderers, without self-control, brutal, despisers of good, 4 traitors, headstrong, haughty, lovers of pleasure rather than lovers of God, 5 having a form of godliness but denying its power. And from such people turn away! 6 For of this sort are those who creep into households and make captives of gullible women loaded down with sins, led away by various lusts, 7 always learning and never able to come to the knowledge of the truth.

OK, if we're all the word, (small w), that means a whole lot of words- I dunno which word I want to be, but I'm pretty sure the good Thew has "emetic" pretty well spoken for..!

Um, BB have you ever read any of Thomas Merton? Know much about him? I suppose you would consider him a raging heretic as well.

Yes, I have read Merton. He is the source that today's paganesque leaders go to and point "see, Merton did it so it must be okay." I like Merton's writing very much,but I think he was straying too far off the trail. Some folks that followed Merton went completely out to the hinderlands, while others were swept into the charismatic renewal. He had an affect on both paths. There were Merton readers who also experimented with his Zen-influenced views (I had a Zen Buddhist as my thesis advisior in college and considered him a great friend) and changed their minds.

I don't have a problem with people wanting to seek and go deeper into their faith, even with the risks that are involved. But the office of Bishop is not one of those places where experimentalists should go, especially right now when the Episocpal Church is in decline.

And again, I personally held many of these eastern-influenced ideas when I was growing up. I appreciate Merton's writing - but I would have loved to sit down and had talks about some of the things he was toying with if he had not died so tragically. I appreciated his honesty very much. Just as in my own conversion from Christian Science, you don't throw the whole thing out with the bathwater, you go piece by excruciating piece, turning it over and over against the biblical witness of scripture, tradition and the insights of the Holy Spirit in that context. In fact, it was the presence of the charismatic renewal that was a doorway for my conversion. I do believe God heals today.

Merton's theology was in development when he died. Who is to say where he would have gone had he not died so early? For all we know, he may have left the Catholic church to get married since that was another difficult issue for him. We just don't know.