And no, it's not a pretty picture. Here are some excerpts:

The Episcopal Church in Conflict 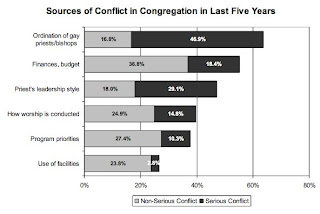 Last, in prior years the Committee on the State of the Church often heard the criticism that our church seemed unwilling to recognize the presence of a major source of internal controversy that some argued was having an impact on our common life, as reflected in declining membership and attendance statistics. The metaphor most often used was that we “failed to acknowledge the elephant in the room,” referring to what many viewed as the momentous decision by the 74th General Convention (2003) to consent to the consecration of the Bishop of New Hampshire. In the 2005 Faith Communities Survey in which about 4,000 of The Episcopal Church’s congregations participated, about 37% reported having at least one very serious internal conflict, resulting in some members leaving the church. Fifty-three percent reported that the conflict was resolved. When asked about the source of the conflict, 35% of those reporting very serious conflict stated that it was over the decisions of the 2003 General Convention.

The Episcopal Church in Decline 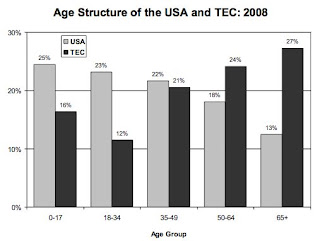 To quote Dr. Kirk Hadaway: “The age structure of The Episcopal Church suggests an average of forty thousand deaths and twenty-one thousand births, or a natural decline of 19,000 members per year,” a population larger than most dioceses. The advanced—and still advancing—age of our membership, combined with our low birth rate, means that we lose the equivalent of one diocese per year.

In the late 1940s and throughout the 1950s we were growing faster than the population, due to a high birth rate and the fact that many formerly unchurched persons were joining Episcopal congregations, usually with their families. By the late 1960s the birth rate had dropped greatly, and many of our youth began to drop away from The Episcopal Church as young adults—a large number never to return. This trend, plus the fact that the decline in the birth rate was greatest among the college-educated population (which increasingly is our primary constituency), began the process through which the average age of adult Episcopal membership diverged from the larger population. Throughout the 1970s and 1980s, and even into the 1990s, we gained more adult members than we lost through persons changing denominations (particularly former Roman Catholics). In the past, more people joined The Episcopal Church than left, making up most, but not all, of the natural decline among participating adult members until recently. Mindful of these trends, it would be useful to leaders of The Episcopal Church to review the results of recent analyses of religion in American life, such as the 2008 study US Religious Landscape Survey, Religious Affiliation: Diverse and Dynamic published by the Pew Forum on Religion and Public Life, which suggests that a far larger percentage of Americans than was historically true report no formal religious affiliation at all.

As a final comment on the age structure of The Episcopal Church we note two facts. First, “youth and young adults” were articulated by General Convention as one of our top five priorities for the 2006-2009 triennium. The Executive Council, in developing the draft budget for the 2009-2012 triennium, did not list “youth and young adults” as one of their mission priorities. Second, in the recent reorganization of The Episcopal Church Center staff in New York City, the position of Staff Officer for Youth and Young Adult Ministries was eliminated and the duties of that officer re-distributed to other ministry areas. 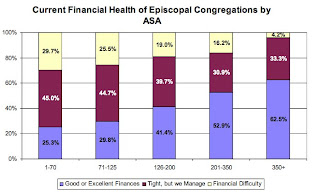 Another noteworthy trend identified in our survey data involves the present financial condition of our churches. Recalling data presented above in Fast Facts 2007 (Table 2 above), income in 2007 showed growth over the previous year, along with a positive five-year trend. Over the last five years income growth was at least keeping pace with inflation—good news, indeed. However, with net losses in membership and attendance, the continuing financial burden falls more heavily upon remaining members. As Figure 2 (below) indicates, a very substantial fraction of our congregations—two-thirds—reported that in 2008 they experienced some level of financial difficulty. Eight percent report “serious” difficulty, 17 percent report “some” difficulty, and another 42 percent describe their financial circumstances as “tight, but we manage.”

The increase in parishes experiencing financial difficulty between 2000 and 2005 is alarming, jumping from 44% to 68%. While that does not worsen between 2005 and 2008, the rate is far too high to allow a rosy picture to be painted ...

It should be noted that with the departure of members of congregations, and now leaders of certain dioceses, from our fellowship additional legal expenses have been incurred by The Episcopal Church at all levels, not to mention the expenditure of time, talent and energy. What has, thus far, remained unstated is that as a consequence of this strife substantial funds have been diverted from the mission and ministry of many congregations and dioceses, adding to our financial burden.

You can read the entire report here.

BB NOTE: Be sure to check out the charts starting on page 14 - a must read for all Episcopalians (and Anglicans too). The chart of the stats diocese by diocese is quite startling. I had no idea that the Episcopal Diocese of Northern Michigan's average Sunday attendance for the entire diocese is the same as just one Easter morning service at Truro. Just one! Why is Northern Michigan still a stand-alone diocese? One can just look at that chart and see that the Episcopal Church needs to do a major "reorganizing" just as large companies and firms are doing right now. The system itself is broken.

Is the current leadership of The Episcopal Church are equipped or empowered to do the type of reorganization that must be undertaken in order for TEC to survive? It's certainly also a wake-up call to the new province as it organizes - the organizational structures must be based on mission and ministry to the local parish and not to a centralized committee. It is not yet clear to me what business model the Anglican Church of North America is following but these charts are a wake-up call of what not to do.

The chart starting on the bottom of page 17 is just shocking. And there still seems to be no correlation between the philosophy of the church's belief system and structure with it's financial and numerical decline. When we look at churches like Holy Trinity Brompton in London or The Falls Church in Virginia that are fast becoming dioceses within a diocese - there are lessons to learn there. And what we believe matters. Our structures flow from what we believe.

The Episcopal Church made a grave mistake in thinking that merely retaining the facades of the church while radically shifting the theology would be good for the church. The numbers just can't fib. Radical action is needed, but not the kind that has been implemented over the past thirty years.

The positive thing in this report - and it's no light thing at all - is that this report has been done and it's been made public. As painful as this is, it is a good thing. It validates what so many have been warning all along. And taking the litigious and punitive route to solve this crisis is just adding more tragedy to an all ready tragic situation.

It is being done, this radical action but perhaps in ways that Episcopalians never even could dream. To God be the glory.
Posted by Unknown at 9:03 AM

In fairness, this is one of the few documents I have seen TEC put out in quite some time that is refreshingly honest and straightforward. Even the most die-hard institutionalist would have a difficult time making lemonade out of these lemons.

And, in fairness, our progressive congregation has lost members, not because of the direction of the church, but because the church is not moving fast enough toward the full acceptance of LGBT persons; they are exhausted and tired of being demonized in the discussions and rhetoric.

This loss may not be all just one thing. Many are just sick and tired of it all.

I think Margaret is right - there is a weariness to it all. Most of us I think would prefer to run a sprint rather than a Marathon.

I also think you illustrate why the division is so profound - the two sides seem irreconcilable at this point.

Perhaps it's time to get out the Rocky Collection.

And yes, I agree Anon - I think it takes courage for a church to publish the stats. I really do. I think it's a major step forward.

PS Thanks for posting margaret - I read your blog too. ;-)

I found it strange that the Diocese of South Carolina, to which I belong, was originally denied consents for Bishop Lawrence, while it was also the ONLY domestic Diocese that had any discernable growth. Why would the powers that be in "TEC" (and I use that term loosely) try to shoot themselves in the foot so much?

Is it the same willful destructional activity that we see in so many of the gay population? (You know the usual "fun" activities that are pressed upon the rest of the people as "regular" and "must be permitted" if one is to be a person with a "brain".)

Just wondering why those desiring to follow God's will are deterred in their areas of going forward and the decadent allowed to run so free to shoot themselves in their feet.

Go Diocese of South Carolina! Carry on the good work of the Lord!

Has it occurred to you that the reason for so many rump dioceses (Northern Michigan may be the poster child but certainly not the only one with fewer than, say, 15,000 or so ASA) is to ensure a majority of the likes of Bruno, Chane, Frade, et al in the HOB and like minded Delegates to push the 'progressive' agenda? Do you ... or they ... think that the current membership of the HOB or Delegates in any way mirrors the beliefs or faith of the majority still clinging to TEC? I don't.

VGR said that the losses caused by the direction TEC was taking would be more than made up by people flocking to the 'new thing.' Margaret, in her comment, blames the continuing loss in membership on the fact that we are not doing the 'new thing' fast enough. He was wrong and I think Margaret is equally wrong. I just don't think most people buy the rather pathetic excuses that sinful acts have somehow become blessed ones.

Don't know the real stats, but what I've read is that the GLBT slice of the overall population is somewhere between 2-4%. Yet we have allowed a small minority to take what was one a vibrant and loving community and turn it into a bunch of hate mongers ... on both sides of the debate.

Looking forward to the new Province where we can start over again.