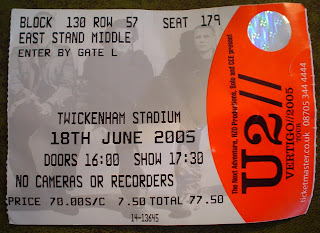 BB NOTE: When I was in college and studying theatre in London during my junior year, I went to lunch at the old Lyon's Corner Coffeehouse on the Strand near Trafalgar Square. After lunch, I decided to pop by the Ladies Room before heading back out and of course, when I got there I found a long line coming out of the Ladies Room and down the hall. Still, I wasn't exactly sure the line was headed to the Ladies Room so I politely, or so I thought, asked the last woman in line if this was,indeed, the line to the Ladies Room.

The woman turned to me, her face pinched. "This is the queue," she informed me, not hiding the scorn in her voice. "The only one in line is the Prince of Wales."

That now being said, it appears that a particular population has become professional queuers, as it were. And who would have thought? Here we have a really fascinating article from the London Times on an extraordinary phenomenon for fans of our favorite band, U2.

Apparently, the Prince of Wales is not the only one in line after all.

For rock stars, they are famously disciplined and so it seems are their groupies. U2’s most committed fans form “selforganised queues” at concerts run by “line Nazis” that function almost identically from city to city, according to American researchers.

A study of almost 500 U2 fans queuing overnight for four concerts in Philadelphia and Atlanta discovered those seeking to gain entry to “the rail”, a sought-after area at the front of the concert, organise themselves in a remarkably systematic fashion without prompting from concert organisers.

The study’s authors, who have a background in anthropology and one of whom describes herself as a U2 fan, discovered that concert queues “are managed largely by fans themselves who organise a system in which the first fans in line keep a list with names and numbers assigned to people as they arrive”.

Venue staff support the system by telling newly arrived fans to get a number from the “line Nazi”, a fan at the top of the queue who invariably takes control at each event. 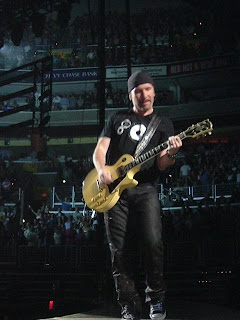 To test the strength of the system, researchers invented a series of scenarios in which people jumped the queue. Fans were then asked to fill in a questionnaire that assessed their reaction. The academics discovered that fans of the group, who had an average age of 30, got upset even when someone cut in behind them, not affecting their place in the queue. Hardcore fans were more incensed than more moderate devotees.

One of the authors, Marie Helweg-Larsen of Dickinson College, Pennsylvania, said: “Fans were annoyed even when the consequences did not directly influence them. The notion of ‘first-come first-served’ is deeply ingrained, but we noted that some believed there was a special code of honour among U2 fans. Cutting the line may have affronted this notion.”

Helweg-Larsen said some supporters of the Dublin band reacted indignantly to “line-cutters” because it was “un-U2- like”. “Bono wouldn’t like it,” one fan told the researchers.

Previous research has shown queuers see those behind them as “less fortunate”. “The queue is a social system, so perhaps a U2 fan’s sense of social justice may play a role,” she said. 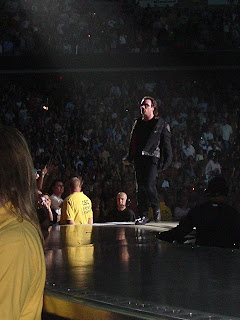 But such concern for others may not be entirely altruistic. “Any threat to the established queue might create chaos to the whole system and threaten one’s own position,” she said. “The moral outrage may be linked to self-interest, especially among dedicated fans who have invested the most time and energy in queuing.”

The authors compared the behaviour of fans queuing for a U2 concert with studies analysing how football fans organise themselves while waiting to gain entry to a match.

“There were similarities,” Helweg-Larsen said. “But the motivation for not cutting the line at a soccer match was partly peer pressure and partly the threat of violent recrimination because of the age of the group and the likelihood that alcohol had been taken.”

The authors are “puzzled” by how “social norms” have emerged among queues for U2 gigs in different cities without rules or enforcement. “Some fans will follow the band from city to city, bringing the system with them, but it doesn’t explain how up to 300 people will fall into line,” she said. 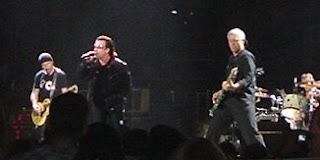 Photos on this page all taken by BabyBlue at her last U2 concert during the Vertigo Tour in DC, where indeed, she was given a verbal number of where to stand in line by some unnamed but apparently well-respected person. It worked great, though! See photos.

"....the likelihood that alcohol had been taken"???